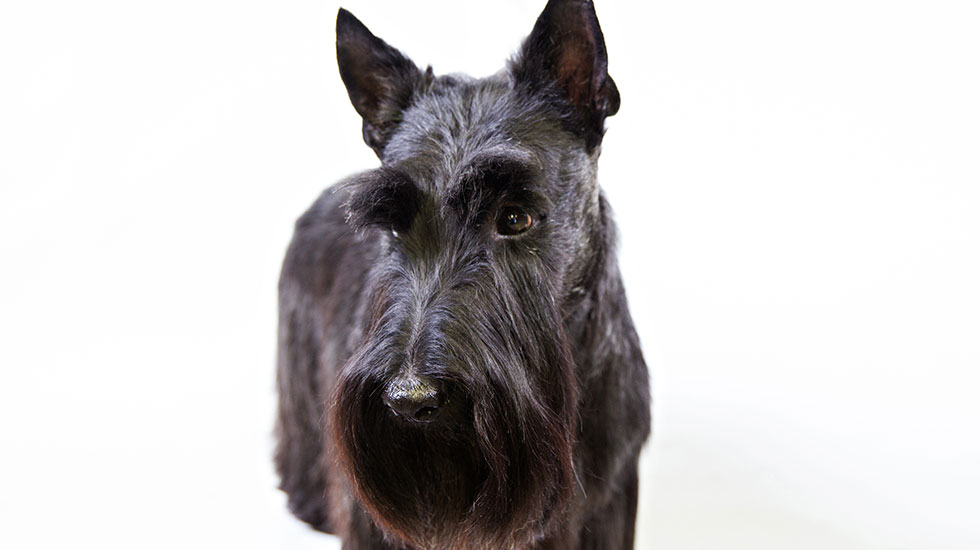 The Scottish Terrier is among the most recognizable of purebred dogs. It has been a mainstay of American iconography since its great wave of popularity in the 1930s, when the breed was a celebrity fad. Humphrey Bogart was a Scottie owner. So were Charles Lindbergh and Shirley Temple. Both Bette Davis and Joan Crawford were devoted to the breed—one of the few areas of common ground between the two bickering rivals.

During World War II Scotties gained an even higher profile thanks to Fala, President Franklin Roosevelt’s constant companion and still the most celebrated “first dog” in White House history.

The breed’s distinctive look has inspired toys, figurines, salt-and-pepper shakers, bookends, and scores of other knickknacks, thingamajigs, and whatchamacallits. In advertising, Scotties have pitched everything from spark plugs to shortbread. And apparel makers will often rely on the Scottie’s well-known outline to lend a dash of retro kitsch to their designs.

And yet, for all that outward familiarity, not many laypersons know the dog beneath the famous silhouette. The Scottie has been victim to certain misperceptions that cling to it as stubbornly as its hard, wiry coat. Here, then, we explode three Scottie myths.

Dorothy Lamour was one of many Hollywood stars who helped popularize the Scottie.

Myth: Scotties are either black or white.

In pop culture, Scotties are traditionally depicted in pairs: one black and one white. One need only think of Black & White Scotch whisky, which for generations has used the terrier mascots “Blackie” and “Whitey” in its branding.

Black is a common Scottie color, but all-white coats in the breed are unknown. (Take a close look at old Black & White ads and it’s plain that “Whitey” is actually a West Highland White Terrier, the Scottie’s close kinsman.)

Aside from black, Scotties also come in a shade of pale yellow called wheaten, the hallmark of another Scottie relative, Ireland’s Soft Coated Wheaten Terrier. In some wheaten Scotties, the color is so light that it can be mistaken for white. But white markings, says the breed’s official standard, are permissible “only on the chest and chin and that to a slight extent only.”

Another Scottie coat option is brindle, in which the coat’s individual hairs are banded with different colors, creating unique and striking coat patterns.

Myth: You can't train a Scottie.

Let’s quickly bust a dangerous myth: There is no such thing as an untrainable breed. Owners who shirk the responsibility of training under the mistaken belief that their dog is of an untrainable breed do a great disservice to themselves, their dog, and their community. Dogs of all breeds can and must be trained.

It’s true that the Labrador Retriever, a breed developed to work closely with human handlers, might train quicker than a typically independent Scottie. And it’s true that a versatile breed like the German Shepherd Dog can train to perform a wider variety of tasks than the sturdy Scot, created ages ago to specialize as a ratting earthdog.

But it’s equally true that a Scottie taken in hand at an early age and trained with patience and a positive approach will learn to mind his manners quite nicely. Independent, fiery, prey driven, sometimes stubborn (not for nothing is the breed nicknamed the “Diehard”), the Scottie can be a challenge to the novice trainer.

Happily, Scotties are also very smart and steadfastly loyal—they live to please their special human. “They look tough on the outside, but they are soft on the inside,” Lucy Berninger, who has had notable success with Scotties in competitive obedience, told the AKC Gazette. “You need to make your point pretty quickly with short, frequent sessions. Often at shows I see handlers—usually with their Golden Retrievers—honing for perfection over and over, and the dogs look interested and are still bouncing and smiling. If I did that with a Scottie before my turn, I would have found I had a flat dog, with his best work left outside the ring.”

Untrainable? Someone forgot to tell this agility Diehard.

There are, of course, as many definitions of “better pet” as there are pet owners. But if the mythmakers mean that females are more affectionate and loyal than males, we must count this myth as totally busted. The preponderance of anecdotal evidence, among expert breed fanciers and casual pet owners alike, suggests that Scotties of either sex will possess the uniquely endearing character the breed is known for. Many will even say the male is the more loving and trainable than the female.

No matter the sex, a well-bred Scottie will exhibit an almost human personality. It is well described in the illustrated standard drawn up by the Scottish Terrier Club of America as a study guide for dog-show judges: “It’s too bad that as judges you miss seeing the broad and complex character that is the Scottish Terrier. You miss out on the rolling eyes, the sighs, the smiles, the selective deafness and all of the other myriad aspects of Scottie behavior that both enslave and exasperate their breeders.”

Such descriptions suggest that a Scottie is not so much a pet as a complicated and fascinating friend. Once you own a Scottie, the breed’s partisans say, you will never again be content with having just a dog.