What to Do When Your Old Dog Forgets Her House Training 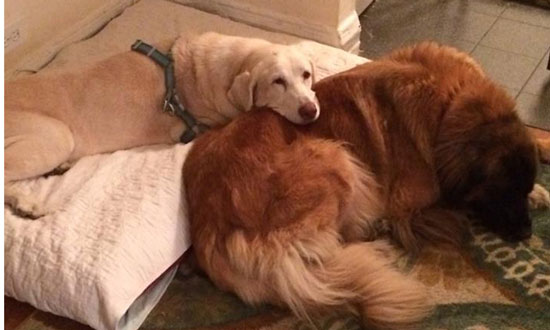 Since Maggie entered into the phase of life known as senior, thoughts that I never dreamed I’d have keep floating through my mind, thoughts like:

* The world is a better place because of the existence of seven-foot-long, washable, waterproof hospital pads.

* Whoever it was who decided to cut a tail hole in a diaper deserves a Nobel Prize.

Old dogs.They are sweet, loving, soulful, and they bring you more in touch with what really matters. Reflected in their wise, weary eyes you see a lifetime of love and happy memories.

But face it, they can also be very messy, as messy as puppies. Like elderly humans, older dogs lose control of bodily functions. That means that you may have a lot of cleaning up to do.

Why, all of sudden, do elderly dogs start to have accidents in the house? The two main reasons are pretty much the same reasons why you see former Hollywood glamour queens on TV, hawking very strange-looking undergarments.

Maggie’s case seems to be physical, since she has none of the other signs of CCD, and still can remember which pocket I put the cookie in. She just can’t seem to hold it, no matter how hard she tries, and, as a well housetrained dog, she tries very hard. Drugs didn’t help much, so we found ourselves in the position of having to manage the problem. It took some trial and error to find the right mix of tools.

Dogs are welcome in our apartment building in New York City as long as they don’t annoy any of the other tenants. They must be well-behaved and clean. Any dog who makes a mess in the lobby can be deemed a nuisance, no matter how old, sweet, and soulful she is.

That's why, for many families, this is the point where they make the difficult decision that the dog’s time is up.

We’re not at that point for my aging Labrador Retriever. It’s true, she’s a bit messy, she sleeps a lot, and she physically can’t do many of the things that used to make her happy. But she still loves to eat, she still loves to visit her friend, Hector, she still is learning a few new tricks, and enjoys it when I rub her velvety ears. For her, it is nowhere near the “time.”

So we came up with strategies for keeping hound and home clean.

Large waterproof hospital pads, the kinds you find in nursing homes, solved the problem of accidents on the rug. (See cover photo for Maggie on her pad with her big pillow.) When we're not home, we cover the rugs, and if there’s an accident during the day, it’s a simple matter of picking up and washing the dirty pads. Adding an old standby that's been around since 1913—20-Mule Team Borax—to our laundry detergent eliminates any hint of the smell. There are also many enzymatic cleaners that can help, as well. When she loses it on uncarpeted areas, a sponge mop and a bucket work just fine.

That didn’t solve the most pressing issue, making sure she doesn’t flood the lobby on her way out the door. Maggie likes to go outside, she likes to totter along on her arthritic legs, sniffing things and visiting people.

But after the third time she lost control in the lobby in the space of a week, we realized that we were going to have landlord trouble if we didn’t do something, fast.

So, I wrote an email to my vet.

“Is it (a) cruel or (b) dangerous to have Maggie wear a diaper for much of the day?”

He said it would be fine, cautioning me to change the diaper as often as possible and to keep her clean (to prevent urine scald). To that end, I go through barrel loads of baby wipes every week.

Even though you generally associate the concept of doggie diapers with those frilly, tiny garments made of heart-print fabric for toy dogs, there are diapers for dogs of all sizes, from Chihuahuas to Mastiffs, and both genders. (They are called ‘belly bands” for males.) They come in washable and disposable versions.

The ones I use, Vet’s Best Comfort-Fit Disposable Diapers, are remarkably well designed. Nothing escapes if you have the right fit and you have it positioned correctly.

Once, while exiting the elevator on our way to the lobby, a particularly dog-unfriendly neighbor, the kind who would complain about something like piddle on the floor, blocked our speedy escape.

Maggie assumed the tell-tale posture right in front of this woman and I was momentarily filled with dread. But not a drop escaped and no one was the wiser as we breezed past the nasty neighbor with a tail wag, a smile, and a pleasant “good afternoon.”