Old English Sheepdog vs. Bearded Collie: How to Tell the Difference

With their long, profuse double coat, the Old English Sheepdog (OES) is the quintessential shaggy dog. You can’t help but know one when you see one. But what about the Bearded Collie (Beardie)? Can you recognize those as readily? In fact, it can be easy to confuse these two members of the Herding Group. You might be lucky enough to meet a Beardie and not even know it. Read on to learn more about these smart, shaggy breeds and how to tell them apart. 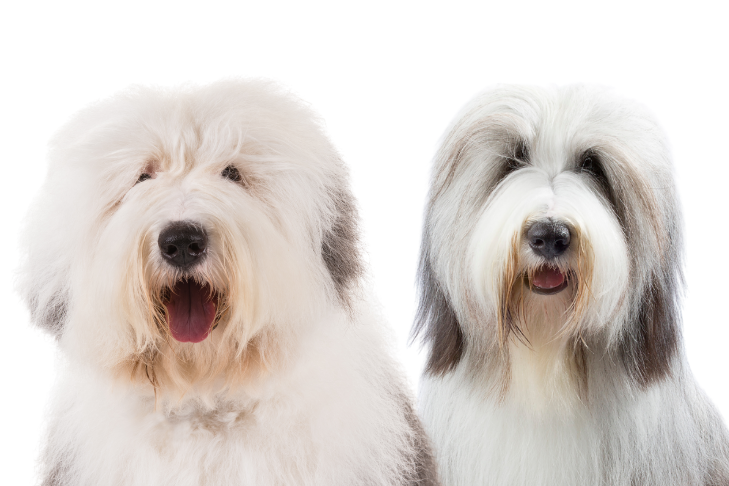 Dale Meyer, the president of the Old English Sheepdog Club of America, has owned OES since 1978 and has bred them since 1981. He feels the main similarities between the OES and Beardie are that both are herding breeds, both have long coats, and they can have similar coloring. Although he rarely sees people confuse the dogs when he’s at dog shows, he thinks it takes a bit of familiarity before a person can tell the two breeds apart. “I know as a newbie I did confuse them from a distance, but once I got closer, I realized which one it was.”

But Meyer owns Old English Sheepdogs, and people may feel more familiar with them thanks to classic films that have featured the dogs. David Williamson, corresponding secretary of the Bearded Collie Club of America and Beardie owner for 35 years, has had a different experience. “When walking my dogs somewhere besides my neighborhood, I have gotten stopped and asked if the dogs are OE Sheepdogs. I quickly (and politely) run through my short spiel of the differences between the two breeds using my dogs as examples. Once at a four-day dog show, it was strange not to be asked if my dogs were OES. I took it that folks who generally come to big shows know the difference between Beardies and OES.”

Williamson, a retired teacher who enjoys agility practices and shows, believes the parallels between the two breeds lie mainly in the coat. He feels the similarities in fur coloring and abundance confuse people. Plus, both dogs are medium-sized, and both have similar heads.

As for differences, one obvious one is found behind the dog. The Beardie has a long tail that’s carried low while the OES has no tail. Williamson also points out the dogs move differently. “The gait of a Beardie is smooth and gives the impression that the dog could work all day. The gait of an OES is unique with its front end taking on a regular, straight-on trot while its hindquarters have been described as a ‘roll’ from side to side.”

Meyer, who judges the Herding Group, the Working Group, and some of the Sporting Group, has been judging the OES since 1995. He agrees that the main likeness between the Beardie and OES is the long coat and the fact they can be colored in similar ways. As for differences, there are many including body proportions, the muzzle, the stop (where the muzzle meets the forehead), and eye color. And although they can have similar colors, Meyer explains the OES are basically grey and white with any brown or fawn in the coat color considered a fault. On the other hand, the Beardie comes in many different colors including brown and fawn.

Finally, although both dogs look shaggy to the novice, according to Meyer, the OES coat is dense, profuse, and stands away from the body. “The Beardie’s coat is double coated as well but not profuse and lays flat on the body. Untrimmed, it becomes much longer than an OES coat.”

The history of the Old English Sheepdog shows the name to be a bit of a misnomer as they aren’t as old a breed as you might expect. They were developed in the early nineteenth century in the southwest of England which is relatively recent in terms of many ancient dog breeds. In addition, they aren’t completely English as the dogs that contributed to the breed were either Scottish or Russian in origin. Finally, they aren’t fully sheepdogs. As Meyer explains, “The history of the OES is as a herding dog, but more so as a drover driving livestock, mostly sheep, to market.”

The history of the Bearded Collie is a bit murkier in terms of dates and bloodlines. However, according to Williamson, they are a Scottish breed and it’s thought they originally were developed from the Polish Lowland Sheepdog. Historians of the breed believe the Beardie was also used to drive cattle to market, but Williamson says, “They were developed originally to watch over and take care of the shepherd’s sheep.”

The gentle and adaptable OES is also known as the Bobtail. Meyer describes them as lovable and clownish. “They very much love people and want to be near them and with them constantly. They all have different personalities, but males tend to be more needy where females are more aloof. I have seen it in reverse as well, but in general it seems that males demand your attention more.”

Williamson describes the Beardie’s key trait as their loving, playful nature. In fact, he says many people refer to them as clowns. However, because their coats require an abnormal amount of care, they need an owner who can commit to a high-maintenance dog. Plus, these outgoing and fun-loving dogs have loads of energy. “They are quite fun to live with, and they do require regular exercise. Most people have them as pets, and some folks compete with them in the herding and agility rings. Bottom line is they need daily exercise and attention.”

Both these hairy clowns are intelligent bundles of love. If you’ve got the time and energy to meet their needs, either would make a wonderful pet. And now you know whether you meet an OES or a Beardie on your next trip to the dog park, there’s more than one shaggy dog.

Related article: Collie History: From Queen Victoria to Lassie & Beyond
https://www.akc.org/wp-admin/admin-ajax.php
Get Your Free AKC eBook