Lhasa Apso versus Shih Tzu: How to Tell the Difference

They’re adorable. Those small, sturdy dogs with their regal bearing and long, gorgeous coats. But which breed are you admiring? The Shih Tzu (pronounced “sheed-zoo” or “sheet-su”) or the Lhasa Apso? To the untrained eye, it can be hard to tell these two dogs apart, especially in full coat. But in fact, although these breeds have a connected heritage, they have different physical traits and personalities. Read on to learn more about these delightful dogs, their similarities, and what distinguishes them from each other.

According to Richard Paquette, Shih Tzu breeder and Canadian Kennel Club All Breed judge, both breeds are quite similar in appearance with their overall rectangular body shape and long, beautiful, double coats. “So much so that early Shih Tzu were erroneously registered as Lhasa when introduced to the USA in the early 1940’s.”

Don Hanson, Lhasa Apso breeder and AKC Judge of several Toy and Non-Sporting breeds, agrees that the public often mixes up the two dogs. “Both breeds, in full coat, do attract attention, and from a distance may appear similar. But closer examination reveals some clear similarities and differences.”

Hanson believes those similarities are many. He says both breeds make great companions and pets, thanks in part to their wonderful, although different, personalities. They can also both live happily in small homes or apartments and each requires frequent grooming to maintain the long coat.

There are structural resemblances as well. For example, they are close in size with the Shih Tzu being no less than 8 and no more than 11 inches at the shoulder and the Lhasa Apso being slightly larger at between 10 and 11 inches tall. And Hanson says, “Both are sturdy little dogs carrying good weight and substance for their size, but not overexaggerated. Both breeds carry their tails over the back in a curl.”

These similarities no doubt originate from the fact that the Shih Tzu was developed from the Lhasa Apso. The Lhasa Apso, originally from Tibet, takes part of its name from Lhasa, the capital of Tibet. According to Hanson, “The Lhasa Apso is a very ancient breed, tracing as far back as 800 A.D. when Buddhism took root. They were cherished by the Tibetan people and served as companions to the Dalai Lamas in the temples. Because of their acute hearing, they alerted the Dalai Lamas to an intrusion and were often accompanied by Tibetan Terriers, with the Tibetan Mastiffs providing protection outside the temples.”

In contrast, the Shih Tzu was developed in the luxurious Imperial Palaces of Chinese royalty. Paquette explains, “The history of the Shih Tzu is steeped in mystery. Legends, documents, paintings, and art objects reference a Shih Tzu-like dog during the Tang Dynasty of 618-907 A.D. The most likely source of our modern Shih Tzu is dogs brought from Tibet to the Chinese court in the 16th and 17th centuries. Shih Tzu means ‘lion dog’ and these early Lhasa-like dogs were bred with Pekingese in the palaces of the Forbidden City in Beijing.” 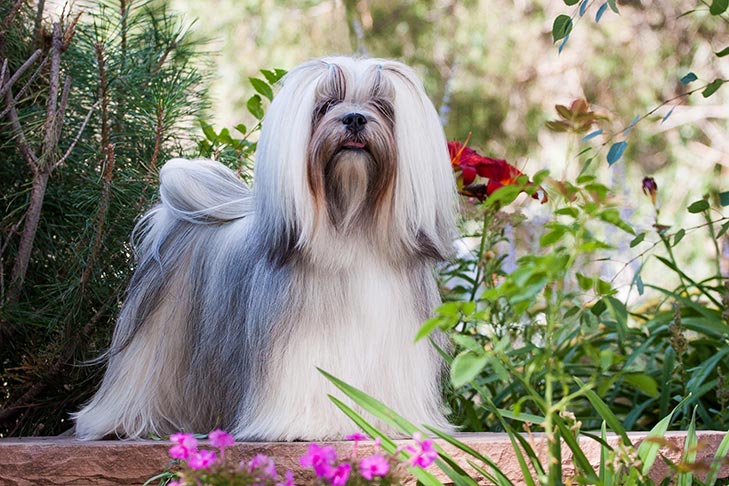 Differences in Personality and Physical Structure

Besides the fact that the Shih Tzu is part of the Toy Group and the Lhasa Apso is a member of the Non-Sporting Group, there are physical differences between them. For example, Hanson points out that although both breeds have dense double coats, the Lhasa’s is heavy, straight, and hard compared to the Shih Tzu’s luxurious and flowing coat.

Paquette feels each breed has been shaped by its heritage. The Shih Tzu was influenced by the Pekingese used in its development, whereas the build of the Lhasa Apso was influenced by their original environment, the rugged and elevated terrain of Tibet. “The Lhasa Apso is a true survivalist dog and they have adapted well to these harsh conditions. They have a sturdy, narrower body with great lung capacity, a longer less square muzzle to warm up the cold air when breathing, well-featured short legs, and a harsher double coat protecting them from the varying temperatures.”

Perhaps the most important difference between the two breeds is their personality, which also follows from their original purpose. According to the breed standard, the Shih Tzu’s sole function is as a companion and therefore they have a friendly, outgoing, happy, affectionate, and trusting temperament. The Lhasa Apso’s standard describes them as happy and assertive but wary of strangers thanks to being bred as a guardian or sentinel dog in the Buddhist monasteries. 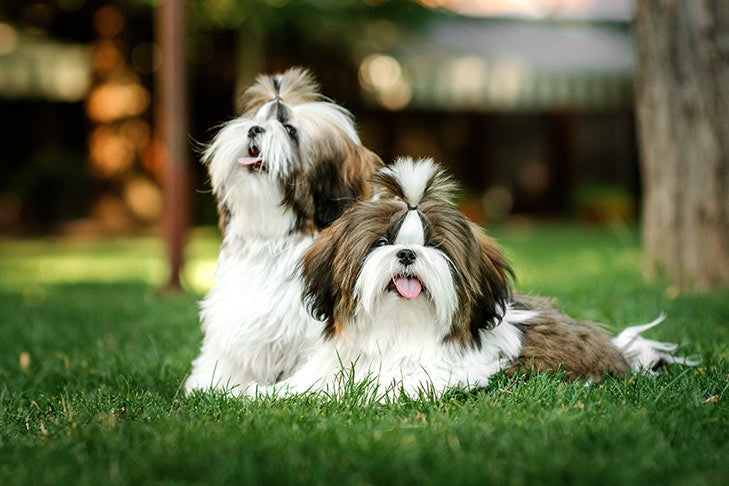 The aristocratic yet hardy Lhasa is famous for its floor-length coat. Hanson adds they are extremely intelligent and mindful of their environment. “They possess acute hearing therefore alerting their people to anything out of the ordinary, as is their heritage. They are loyal and very loving of those that they learn to trust. Great and faithful companions.”

The equally beautiful Shih Tzu is great with children and happiest when sitting on your lap looking cute. The standard says they are proud of bearing with a distinctively arrogant carriage. Paquette believes, “Temperament is the hallmark of the breed and most important element of the breed essence.”

With the Shih Tzu weighing only nine to 16 pounds and the Lhasa Apso 12 to 18, these are two dogs that pack a lot of personality in a small package. Either one would make a tremendous pet. Hopefully, the next time you encounter one on the street, you will know which delightful breed you’re admiring.