They are two of the most well-known and beloved breeds – the Labrador Retriever and the Golden Retriever. In fact, the active Labrador is the most popular breed based on AKC registration statistics, an honor they’ve held since 1991. And devoted Goldens aren’t far behind, ranking number four in 2020. You might be familiar with these friendly dogs, but do you really know what sets them apart from each other? One is not simply a furrier version of the other. Read on to dig into the difference between these two members of the Sporting Group. 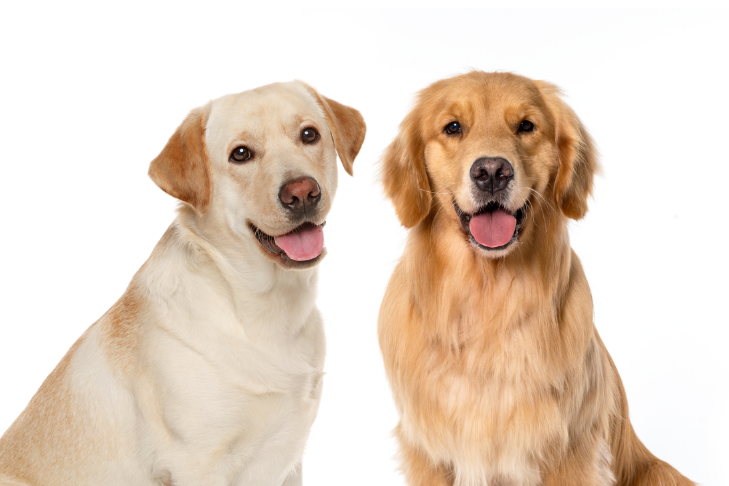 Nancy Talbott got her first Golden in 1977 and her first Labrador ten years later. As an AKC judge and former education director and breed mentor for the Golden Retriever Club of America, she’s been breeding, showing, and participating in dog sports for over 40 years. According to Talbott, a main similarity between the two breeds, along with their structure and size, is their shedding. “Both breeds shed all year, and profusely in the springtime! The shorter coat of the Labrador is not a non-shedding coat.”

She also explains the breeds share their history as hunting retrievers, their trainability, and their sociable temperament. “The hallmarks of both breeds are their kind nature with all humans, from infants in a stroller to seniors in a long-term care environment, and everyone in between. Both breeds also get along well in groups of other dogs – an aggressive Labrador or Golden is a rare occurrence and not acceptable. A proper Labrador or Golden temperament is tolerant, loving, gentle, and unusually empathic.”

Dr. Fran Smith, vice president and health chair of the Labrador Retriever Club, has been breeding Labradors under the kennel name Danikk since 1970. A judge of both hunt tests and field trials, as a veterinarian she is also president of the OFA, the largest companion animal health database in the world. Smith agrees that the Golden and Labrador are both sociable, personable, and very trainable. Not to mention, both breeds shed a lot.

There are physical differences between the breeds. Some are obvious while others take a more discerning eye. First, Labradors tend to be heavier in appearance due to denser bone, a deeper chest, and a rounder ribcage. Second, there are subtle distinctions in the shape of the head, although both are designed for carrying game birds. And finally, the coats vary as they serve different purposes. Talbott explains, “Goldens were developed as primarily upland game dogs, so they require a firm jacket and moderate feathering over a dense undercoat that protects the body from brambles and other hazards, as well as harsh weather. Labradors were developed as primarily water dogs, and their coats insulate them against cold and icy water with dense undercoats and a slightly oily, short outer coat.”

Smith points out there are differences in the coat color as well. “Labradors can shed hair in three colors – yellow (ranging from pale cream to fox red), black, and chocolate. The Golden coat varies from very pale cream to nearly fox red. So, an owner can match the shedding to their decorating and wardrobe preferences.”

The personalities have some subtle differences as well. Smith finds Goldens to be clingy compared to Labradors. And when it comes to training the breeds, Smith explains that Goldens love repetition whereas Labradors don’t. Plus, she adds, “I can tell you that it is easier for the public to deal with an untrained Golden Retriever than an untrained Labrador Retriever.”

Talbott believes, although it’s a generalization, that the two breeds have differences in sensitivity as well. She labels the resilient, confident, and joyful Labrador as the Peter Pan of retrievers because they see the fun in every situation and never grow up. On the other hand, while Goldens love the fun too, they consider all the angles before they burst into a new situation with gusto. She says field trainers have told her Goldens think too much, figuring out their own way of doing a task. But Labradors just go for it.

She’s developed her own metaphor for this difference in personality. “If an explosion happens in your backyard, a Golden will call 911, check to be sure everyone is ok, and then give you emotional support. A Labrador will grab a stick and a hot dog and charge outside to be the first one at the BBQ!”

Talbott explains that people can confuse the two breeds, asking if they should get a Lab or a retriever, or thinking a yellow Labrador is a Golden. But in many cases, it’s really about terminology. “There is no such thing as a Golden Labrador, and a Black Lab is not a separate breed” she says. “An English Cream is not a different or more valuable breed than a Golden Retriever, and there are no Labradors in any other color than black, yellow, or chocolate.”

Smith hears people say they want/have a Golden Lab, which is of course a misnomer created from blending the names of both breeds. Another misconception she wants to clear up is based on the Labrador’s historical purpose. “I wish people knew that this is a retrieving breed and if they do not want objects in their home picked up and moved and sometimes destroyed, they need to do appropriate training and appropriate confinement.”

Talbott has a similar concern, saying, “I wish more people understood that while they are great companion dogs, both are active breeds, primarily hunting dogs, and as such they need a job to do from puppyhood on. A Golden or Labrador left alone, not trained, and not socialized well becomes a destructive dog. They dig, they chew, they love mud and water, and they shed. All those traits can be channeled through adequate mental and physical exercise, proper grooming, and a safe, secure living situation (crate training and a fenced yard). Goldens and Labradors are family dogs and need to be indoors as part of the pack, not left alone outdoors.”

Now you know the differences between these two wonderful breeds. Their names are similar, they’re both retrievers, and they can both be yellow, but there’s so much more to them than that. Whether you choose to have one join your family, or you simply meet one on the street, you can be confident you understand exactly what sets them apart.

Related article: Golden Retriever History: Behind the Breeds Unfashionable Past
https://www.akc.org/wp-admin/admin-ajax.php
Get Your Free AKC eBook