The Clumber Spaniel earns high marks as both an entertaining companion and dependable bird dog.

By all accounts, sharing one’s life with a Clumber Spaniel is a wonderful thing. Clumbers possess a cornucopia of virtues— among them an affectionate and amiable nature, intelligence, handsome appearance, and talent and enthusiasm in fieldwork. This heaviest of the flushing spaniels has withstood the test of time as an exemplary and versatile canine. But what makes Clumbers particularly delightful, their fans explain, is that they’re just a joy to have around.

“When I get up to let the dogs out,” says Blackman, “one of them will not leave the bedroom unless he is carrying something. Usually, it’s a stuffed animal. If for some reason there are none left of the two or three hundred stuffed animals he has, he’ll go and pick up a piece of clothing. Then he’ll take that to the back door. It’s such an ingrained thing with him, it’s taken eight years to get to where when I say ‘Put it down,’ he puts it down before he goes outside.” Blackman attributes the trait to the breed’s heritage as a flushing spaniel.

“I love seeing it,” she says. “I don’t tire of it — it’s part of their personality.” Indeed, appreciating the Clumber’s legacy as a hunting dog is integral to understanding more than why he loves to carry things. It is the key to  understanding all of the unique traits that make him a Clumber. 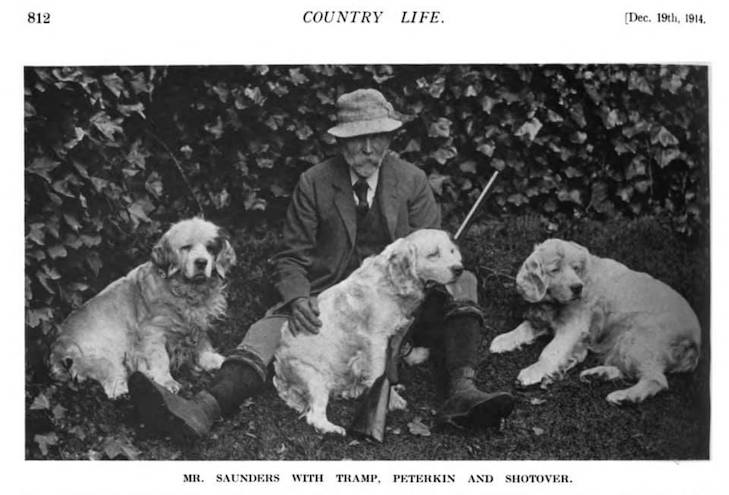 Theories Behind the Clumber

Much of the Clumber’s early history is lost in a tangled web of folklore and conflicting information.

One theory has it that they traced back to the Alpine Spaniel, a strain of light-colored hunting dogs probably originating in Spain. Another possible ancestor is the Blenheim Spaniel, a red-and-white or lemon-and-white hunting dog of England. Yet a third theory suggests that large English spaniels were crossed with Basset Hounds, or with the St. Hubert’s Hound, the progenitor of the modem Bloodhound. Whatever the case, the breed’s reputation as an outstanding hunting dog was rapidly established.

We know for certain that the first examples of the breed were owned by the Duke of Newcastle in the latter half of the 18th century and that the breed took its name from Newcastle’s English estate—Clumber Park. 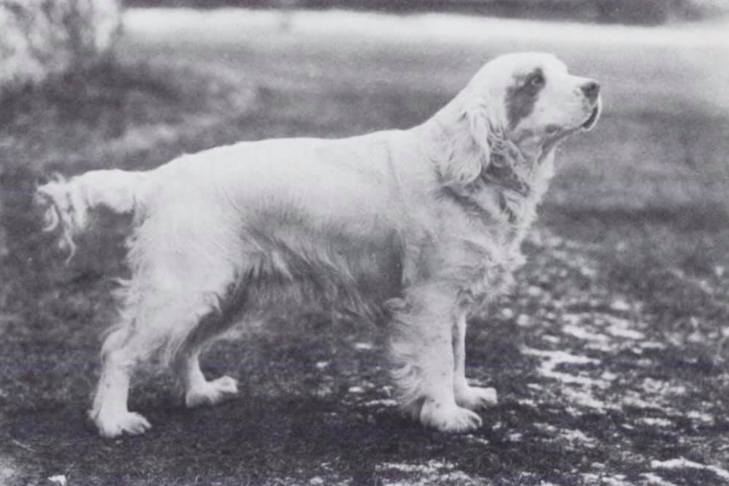 Newcastle family lore tells us that dogs were shipped to the first Duke as a gift from a nobleman around 1760. The second Duke inherited his title in 1768, and his gamekeeper of 30 years or so, William Mansell, is generally given credit for developing the breed as a sturdy, adept dog for hunting in the local cover of thick rhododendron forests. (For many years the dogs were called “the Duke’s breed” or “Mansell’s breed.”)

Clumbers became a favorite of the many gamebird hunters among the area’s titled families and landed gentry. Since the duke’s day, Clumbers have been popular with British royals, including Edward VII and George V (an important Clumber breeder in his day). The breed has been described by its partisans as naughty, mischievous, stubborn, affectionate, and entertaining, but through it all the Clumber retains the touch of regal dignity that marks him as a companion of crowned heads. 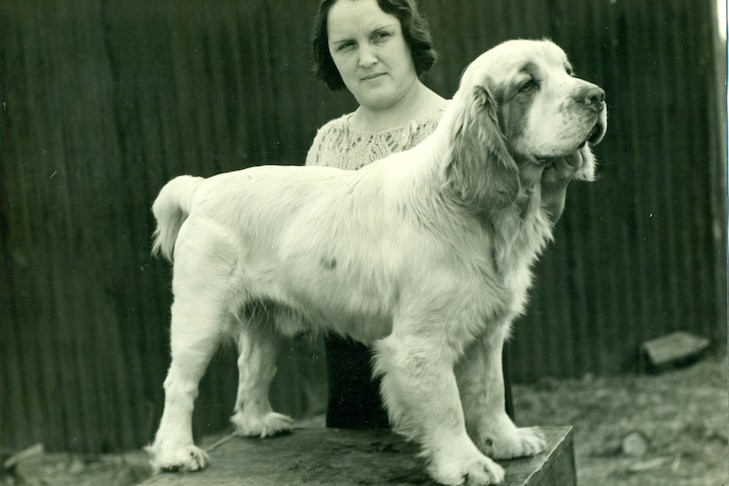 Little Change Throughout the Years

As accessories of the British upper crust, Clumbers were popular subjects for leading sporting artists and portrait painters during the heyday of the British aristocracy. Seen today, these pictures show that the breed has changed but little in all the years since.

A 1788 painting by Francis Wheatley features the Duke and his dogs in a hunting scene. In it, the dogs appear somewhat lighter than today’s Clumbers, with slightly smaller heads. An 1834 painting, Lord Middleton and His Clumbers, shows dogs that look much more like the Clumber Spaniel of today. In 1844, a Lieutenant Venables, a British officer stationed in Nova Scotia, brought the breed with him to North America, and the Clumber was one of the first nine breeds recognized by the AKC in 1878, when a dog named Bustler was registered.

A boy and his Clumbers in C. Burton Barber’s painting: The New Keeper.

Several champions of the late 1880s had the basic shape of the breed today, though some in the early decades of the 20th century were shorter-backed than today’s dogs. The breed was slow to gain popularity in the U.S., but when it did, it happened quickly. Of the more than 500 Clumbers who have completed championships in the 20th century, the vast majority did so after 1968.

Thanks to the work of dedicated breeders, the Clumber retains the outstanding hunting abilities for which it was praised early on. Many of today’s show­ ring Clumbers excel in the field, and it is the rare Clumber who is not interested in birds.