With spotted pink skin, furry socks, and a crested hairdo, it’s hard to mistake the Chinese Crested for any other breed. Yet in earlier times, the Chinese Crested was known by several different names: the Chinese Hairless, Chinese Edible Dog, Chi­nese Ship Dog, and Chinese Royal Hairless. Even locally, the breed took on different nicknames depending on where it was found. In Egypt, the breed was sometimes called a Pyra­mid or Giza Hairless. In southern Africa, it was called the South African Hairless, and, in Turkey, a larger version was known as the Turkish Hairless.

Perhaps the unique breed’s most modern nickname is the “Dr. Seuss Dog,” a reference to the way the Crested resembles the imaginative creatures in the author-illustrator’s well-known books.

Drawing of a Chinese Crested in 1914

Painting of a Chinese Crested in 1882

Cresteds Around the World

Although the exact origin of the breed is not known, it is believed to have evolved from African Hairless dogs which were reduced in size by the Chi­nese, who seemed to like smaller toy breeds like the Shi Tzu and Pekingese. It is thought that, for centuries, Chinese sailors sailed the high seas with the breed on board, and that puppies were frequently traded with local merchants at port cities. Today, the breed can still be found in ancient port cities around the world. It’s a known fact that during the time of the plague, hairless dogs were stowed onboard ships to hunt vermin which were heavily in­fested with fleas carrying the dreaded disease.

Spanish explorers found Chinese Crested dogs in Mexico and other parts of Central and South America as early as the 1500s. British, French, and Por­tuguese explorers likewise found the breed in various parts of Africa and Asia during the 1700s and 1800s. Early missionaries, who frequently traveled with the explorers, docu­mented nearly every aspect of their journeys to these places. Their diaries describe finding the breed in many of these countries. By the mid-19th cen­tury, Cresteds began to appear in nu­merous European paintings and prints.

During the 1850s and ’60s, several Chinese Cresteds were taken to Eng­land and placed on exhibit in a local zoological show. The press reported their appearance, and several photos of the dogs were published. Unfortunately, despite public interest, no breeding program was established and the breed soon died out in the country.

At about the same time, Cresteds be­gan showing up in America. Harpers Weekly carried a large, two-page print entitled “Sketches at the Dog Show at Gilmore’s Garden.” At least two Hair­less and possibly one coated (Powderpuff) Crested were shown in the sketch. The American Kennel Club has discov­ered Crested entries from a number of dog shows held in the late 1800s.

In the 1880s, Ida Garrett, a young New York journalist, became interested in Cresteds and other hair­less breeds. Over the course of 60 years, Garrett bred, exhibited, and wrote extensively about dogs—hairless breeds in particular. She traveled widely and im­ported several prized Crested dogs from around the world to her home in the U.S.

During the 1920s, she be­ came acquainted with Debra Woods of Homestead. Florida, and as­sisted Woods in obtaining a number of her earliest Chinese Cresteds, as well as several other hairless breeds. The two women became close associ­ates. For nearly 40 years, they jointly promoted Chinese Cresteds — Garrett through her prolific writ­ings, speaking, en­gagements and dog club activities, and Woods through her extensive breeding, adver­tising, exhibiting, and registration ser­vice. They remained lifelong friends until Garrett died in the 1950s. 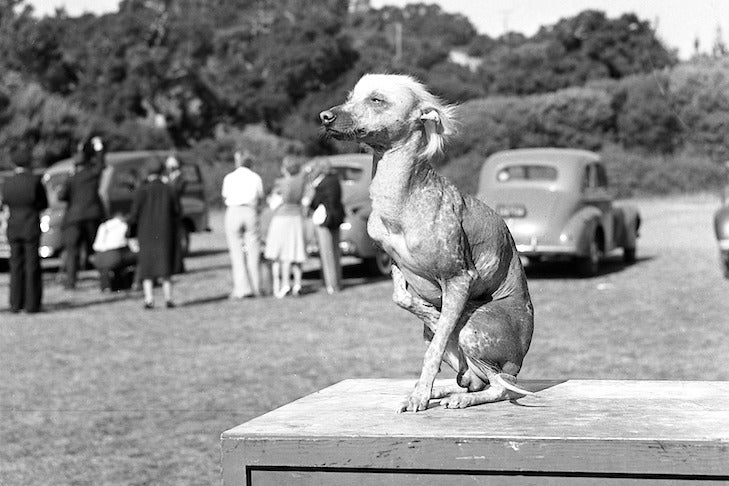 By the 1930s, Debra Woods had be­gun keeping a log of all her dogs which, in the 1950s, became a registration service and, eventually, the American Hairless Dog Club. It served all hairless breeds, but particularly Chinese Crest­eds. Woods closely guarded and took great pride in these stud books, which she maintained until her death in 1969. The books were then main­tained for nearly 12 years by Jo Ann Orlik of New Jersey, and eventually became the property of the American Chi­nese Crested Club upon its founding in 1979.

By the 1950s, Chinese Cresteds entered the spotlight when Gypsy Rose Lee, the famous American singer/dancer/entertainer, obtained a Crested from her sister, June Havoc. Lee went on to be­ come an ardent breeder and protector of the breed, and is credited with helping publicize the Crested worldwide. In fact, most active Crested kennels in the world can trace the ancestry of their dogs to the Crest Haven (Debra Woods) and Lee lines.

Formation of the ACCC

The American Chinese Crested Club was founded in 1979 in Cockeysville, Maryland. Shortly after, the club held its first annual meeting and show on June 1, 1980, in Baltimore, Maryland.

In September 1985, the Chinese Crested was accepted into the Ameri­can Kennel Club’s Miscellaneous Class, where it could compete in Miscella­neous at conformation shows, and in regular AKC obedience classes. It wasn’t long afterward that Angela Wills’ Hairless dog, Dickerson’s Hop Sing, C.D., became the first Crested to earn the AKC Companion Dog title. The first coated (Powderpuff) to earn a C.D. was Mlclanjo Kl-Mi Wagayo, C.D., owned by Marie and Michael Mooney.

In November 1990, the Board of Di­rectors of the American Kennel Club opened its Stud Book to the registra­tion of the Chinese Crested, effective February 1, 1991. Assigned to the Toy Group, Chinese Cresteds were fully AKC-Recognized and eligible to compete in AKC licensed events on April 1, 1991.

Related article: 9 Facts About the Shih Tzu
https://www.akc.org/wp-admin/admin-ajax.php
Get Your Free AKC eBook