The Azawakh is one of the AKC’s newest recognized breeds, becoming officially AKC-recognized in 2019. These tall and elegant sighthounds — known for their athleticism — are the passion of Kayley Paylor of In Stride Azawakh & Training. Paylor has fallen in love with the breed and she has been breaking records with her pack of Azawakhs – especially her three-year-old, Anubi (Naram-Sin du Haras de Crouz RA FDC SC CAA DCAT SCN SIN SBN THDN CGCA CGCU TKP RATI).

“I’m so incredibly lucky to have my Azawakh,” Paylor says. “I am thankful to their breeders every single day for taking a chance on me and sending me dogs that are such a perfect fit for my life and my program. And, as much as we are at trials or training, they are more often at home cuddling with me and my husband on the couch. They are capable of everything whether that’s versatile sport dog or loving pet with an excellent off-switch.”

Paylor wasn’t new to sighthounds (she also has a Saluki) when she became interested in and began researching Azawakhs: “ The more I read, the more intrigued I got. I was considering getting into dog sports and wanted a sighthound, but still wanted a breed that was more biddable and handler focused, and one that wouldn’t disappear into the distance if I accidentally dropped the leash. All of this led me to the Azawakh.” 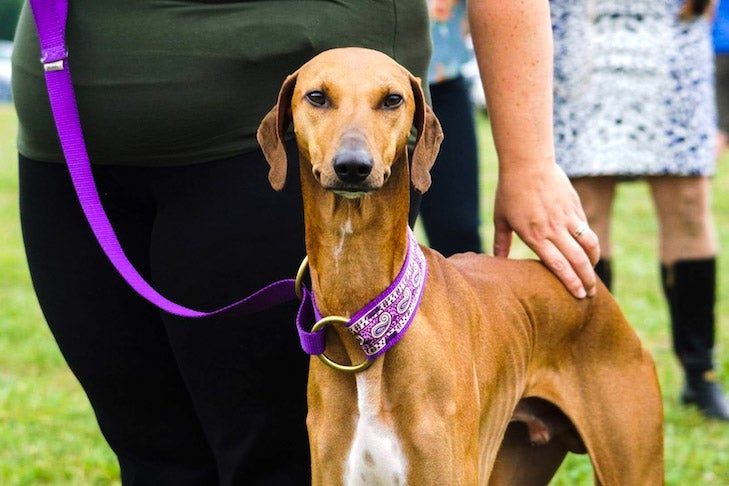 Paylor spent three years researching the breed, community, and breeders before finding the right Azawakh breeder for her. “The breeder and I talked extensively and she matched me with a dog with the temperament I wanted – steady, versatile, calm – she matched me perfectly in every way. Anubi was the first Azawakh that I met, my first show prospect, my first sports prospect, and after meeting him I was completely hooked on the breed. I loved the time I spent meeting his breeder, mother, and two of his littermates in France. The next day we flew back to Washington and immediately got started in a basic puppy manners class.”

Even as a young puppy Paylor notes that Anubi was a standout. “His work ethic is incredible. You talk about food or toy drive, Anubi really enjoys working for work’s sake. He soaked in everything I taught him, so we enrolled in every class I could find.”

Paylor and Anubi’s breeder had agreed that she would show him in the breed ring, and Paylor planned to pursue lure coursing. “I hadn’t imagined we would do much beyond that, but he loved every single new sport that we tried.” Anubi has been setting records as a performance dog:

“It’s been a really wild ride. I essentially got Anubi as a pet dog with the intention of dabbling in some sports and now, often, we’re out trialing, showing, or competing three weekends out of four. I’m honored to have such incredible partners in my Azawakh.” says Paylor. 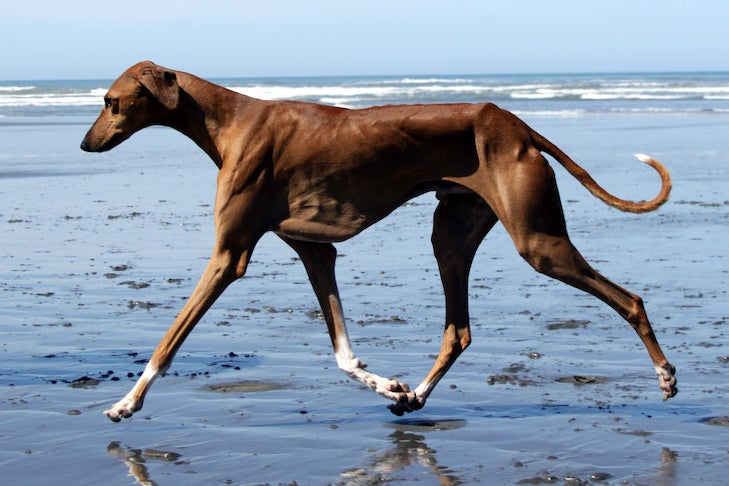 “It’s been so rewarding to give an ancient working breed modern outlets” described Paylor who noted that of all the sports they train in lure coursing is his favorite “walking to the line he’s calm and composed until the Huntmaster declares ‘Tallyho!’ And then he’s off! There’s also something about Agility and Flyball that causes him to let his guard down, which I love to see.”

She also noted that he’s not a fan of water and doesn’t have a huge toy drive so Dock Diving and Disc Dog are sports that Paylor pursues with her two Azawakh girls who enjoy toys and water more. Azawakhs are quite uncommon, so Paylor and her pack definitely stand out when they compete, and although Azawakhs are very athletic they haven’t always been thought of as performance sport dogs.

“I honestly didn’t realize before I started competing that there were breeds that you just didn’t use to compete. That sounds naive, but I came from the world of pet dog training, so in the beginning, it hadn’t occurred to me that I had a non-traditional breed for dog sports. It became clear pretty quickly, but I’m fortunate that in my area there are so many people doing amazing things with ‘off breeds’ that everyone I’ve talked to has been really encouraging.”

When they first started training with Anubi, Paylor noted that there was a bit of initial skepticism in the breed world where people were concerned that she would “ruin his instincts.” Paylor decided to stop posting publicly about their sports training until they were more advanced in their sports and earning titles. “These days, I get a ton of encouragement and I’ve made friends with others who are doing cool sports with their Azawakh. It’s rewarding to see people I’ve talked to over the past few years start bringing home their own Azawakh with a goal to do performance events” described Paylor. 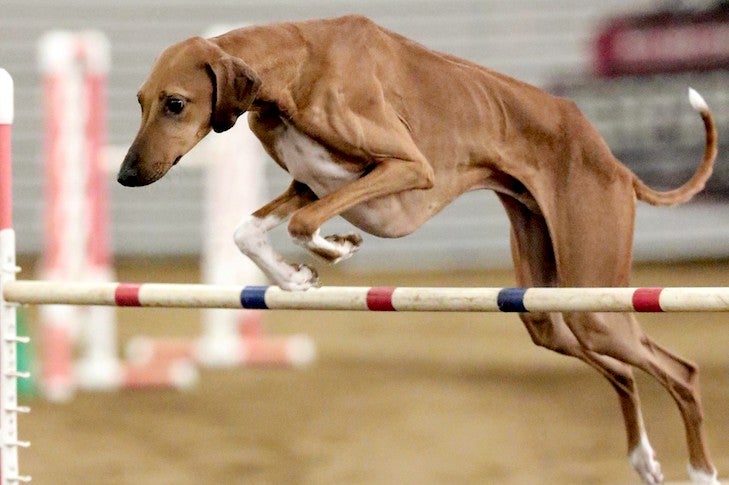 Anubi competes in Agility at 16 months. Photo by Joe Camp.

In addition to being a sports dog, Anubi is a therapy dog bringing comfort and joy to residents at an assisted living and memory care facility. Anubi began visiting with residents after becoming a certified therapy dog at a year old. Paylor explained that Anubi has always been called to work as a therapy dog.

As a young puppy, she got encouragement from others to get him involved and he took to therapy work right away. “Even through his long secondary teenage fear period, where he didn’t want to engage with most people, he still loved our visits to our facility. The residents love him because he’s tall enough to be at their height, is calm, and not prone to licking them, and he radiates heat. It’s been such a special experience to see how the residents respond to him. We miss the work a lot with COVID restrictions” describes Paylor.

COVID-19 and the canceling of dog shows has of course impacted Paylor and her dogs. “Amidi is about 1.5 years old, just at the age where her foundation work is solid and she’s ready to compete. In some sports like Rally and Scent Work, I’ve already debuted her and she has some qualifying runs already; we just have to wait now until we can get back to trials” noted Paylor.

Similarly, with her youngest, Amalu, “Bringing home Amalu a bit of a last-minute decision after planning for months to years for the older two Azawakh, so I’d mostly planned this year for foundation. So, while we’re missing classes and exposure to the trial environment, I can do a lot of her basics at home.”

Unfortunately, so many of the exciting competition debuts Paylor and her dogs have been training for have been pushed back. Both Anubi and Amidi would have begun competing in Flyball this year but now that will have to wait until 2021.

While this is disappointing, Paylor explained that she and her dogs have been keeping busy: “The two upsides to COVID for us are: 1. I’ve had a lot of time to spend on conditioning my dogs and they’re in the best shape of their lives. We’re hiking probably close to 20 miles most weeks. 2. I’ve been doing online dog training lessons, which my dogs have been demoing for, so they’ve gotten a lot more training than I usually have time for.”