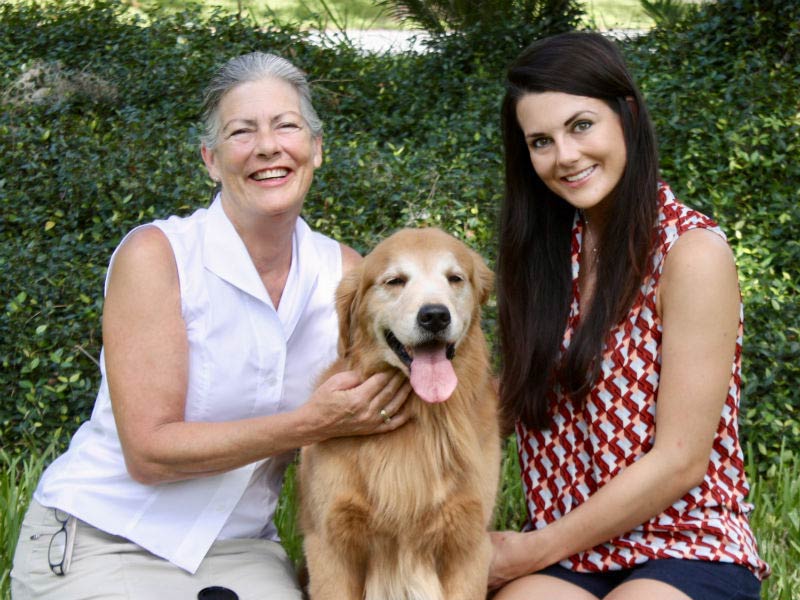 Reputable breeders don’t just breed in the moment: They are thinking years, even decades ahead, thoughtfully breeding dogs that are typey, healthy, and sound enough to continue to benefit the breed long after they are gone. And that philosophy of paying it forward is even more satisfying when a second generation decides to plunk itself down into the whelping box, too.

Robin Bowen, of Ocala, Florida, got her first Golden Retriever in 1978, and after some experience with obedience, she tried her hand at conformation with a Gordon Setter she also owned. By the 1990s, she had decided to start her Prism Golden Retrievers. The search for a foundation bitch with a pedigree rich in longevity, performance, and correct conformation led her to the major-pointed Bessie (Rachel’s Solo MVP Contender CD, RE, JH, WC, VC, CCA). Over the years, Robin has focused on titling her Prism dogs in AKC obedience and rally, while her daughter Maxie shows them in conformation.

If Maxie isn’t in the ring as much as she’d like these days, she has a good excuse: This former junior handler and AKC veterinary scholarship recipient is in her final year of veterinary studies at the University of Florida at Gainesville, and she plans to graduate next year to a career in emergency medicine, or at a practice in an underserved area. Still, she has room in her life—and her apartment—for four dogs: a German Shepherd Dog puppy; two mixed-breed “foster failures” (one is an AKC Canine Partner getting ready for his rally debut); and, of course, an owner-handled, multi-titled Golden Retriever that is working on his open title in obedience.

Maxie found time to talk with us about dispelling breeder stereotypes in the veterinary community, why she registers all her puppies before they go to their new homes, and why Golden Retrievers are the best dogs ever.

Educating the educators: “There’s a huge disconnect on the part of vets, vet students, and vet techs about dog breeders. I can’t tell you how many times, when I’m in a class or a clinic, I’ll hear people say stuff like, ‘breeders are bad,’ or ‘she came from a breeder –- no wonder she’s unhealthy.’ They don’t take time to learn what a good breeder does. There’s a huge hole in the veterinary curriculum talking about health clearances and breed-related health issues that breeders are testing for –- many vet students don’t even know that the Orthopedic Foundation for Animals (OFA) exists.”

CH Prism’s Hear It In The Deep Heart’s Core CD RN JH VC, aka “Edward,” lives with Maxie in Gainesville.

Good advice: “A lot of vet students ask me for guidance on where to get a dog. If I don’t have a specific breeder to refer them to, I tell people to familiarize themselves with the Breeder of Merit program. It consolidates all the things you are looking for in a reputable breeder.”

Happy ending: “My German Shepherd puppy was whelped by one of my good friends –- she imported the pregnant dam from Germany. When one of the puppies died suddenly at eight weeks, she had me examine the whole litter. Two of the puppies had severe cardiac dysfunction, and one was almost in heart failure and had to be hospitalized. I fell in love, and I kept her. My friend is a Breeder of Merit, and even though she technically wasn’t the breeder of this litter, she had them all ultrasounded and went above and beyond to make sure they were healthy to place in pet homes.”

How junior showmanship helped outside the ring: “I was an extremely shy child, so it was good for me to fend for myself and learn how to talk to grown-ups. And I know so much about dog structure and conformation just from showing dogs as a kid. Before I got to vet school, I knew general anatomy already. Now I can watch a dog or horse move and know where it’s lame. And while I have always wanted to be a veterinarian, it was at AKC dog shows where I saw just how specialized my future career could be. I was able to shadow board-certified cardiologists and ophthalmologists at events as they examined dogs for health clearances.”

Breeding philosophy: “We ask ourselves: ‘Would this litter improve on the Golden Retriever breed as a whole?’ We have been gifted with the responsibility of being advocates for our breed, and we do our best to make each litter an improvement on the past. In a world where there are so many unwanted dogs, the intentional creation of more animals must be done with responsibility, research, and careful planning. Our main goal for each litter is first and foremost the health of the puppies. Under the umbrella of health, we put priority on genetic diversity, longevity, temperament, and structural soundness.”

Ch. Prism’s Neat, No Ice, aka “Bourbon,” stands in the ring with handler Janice Granda.

Getting to know you: “On our website, we have an application for prospective puppy buyers that includes questions about their daily schedule, family, other pets, etc. Then we typically exchange several emails, speak on the phone, and sometimes meet in person. Sometimes puppy buyers wait for months or years, as we like to match each puppy with its new home as an individual. And regardless of whether or not they are approved, we send applicants an email that contains educational information about Golden Retrievers and resources for finding an ethical breeder.”

No puppy left behind: “We microchip all our puppies before they go home and require the new owners to enroll with AKC Reunite. We also register all of the puppies for our buyers, because a lot of the time puppy people lose the papers. And that way they also have help filling out the form, which can be kind of confusing unless you’ve done it a thousand times. Plus, I think having a paper trail is a useful thing for the breed’s history. You can go back and say, this is how many Goldens were born in 2017. I love all my dogs, registered or not, but for some people, having papers really does make them value their pet more.”

Putting the “fun” in “refund”: “We require new puppy owners to take an intro-level puppy kindergarten class with their new puppy, and we provide monetary rebates for each title earned. Basically, it’s half the money spent toward entry fees for the title or conformation majors. Especially for an owner-handler, if they’re spending so much money doing this themselves, you want them to have a good experience –- to get hooked and keep doing it. I think a rebate does help at least offset a bit of what they’re spending.”

Mentoring musts: “We wouldn’t be where we are now without the kind support of those who came before us. My first mentor was Collie breeder and judge Anne Cross. She was the first person who handed me a dog and said, ‘I’m going to teach you how to show this dog.’ In my own breed, I would just hover around the Golden people in the grooming area and ask, ‘Can I watch you groom?’ And I was a ringside assistant for Vincent Zuniaga, who does photography now. Sometimes there are people who give you just one comment, and that helps you along the way.”

Prism’s Frost Yourself… With Ice, RN, aka “Kate,” retrieves a bird. Kate is Bourbon’s littermate.

Role modeling: “Dog breeding shouldn’t be done as a side-note; it should be done with intention, ethical responsibility, and with a goal in mind. I truly believe if you are creating animals, you need to think about the longevity of these creatures, not about your ego, even though we all get competitive and want to win. To me, the Breeder of Merit program rewards breeders for giving more consideration to the litters they are producing, for trying to achieve this next level of accountability. Any breeder who chooses not to work toward achieving Breeder of Merit status should reconsider his or her motives for breeding dogs.”

The right stuff: “I was introduced to Goldens because of my mom, but I have to say that I would have probably ended up in the breed eventually. Over the years — especially during junior showmanship — I’ve owned and kept many different breeds of dog: Alaskan Malamute, Rhodesian Ridgeback, Shiba Inu, and Shih Tzu. But I’ll always be a Golden Retriever girl because, though there is no breed I dislike, Golden Retrievers are my heart dog. They are trustworthy, gentle, kind to the core — and willing to tag along for whatever life hands us.”

The American Kennel Club recognizes Breeders of Merit for their dedication to breeding purebred dogs with the appearance, temperament, and abilities that are true to their breed standard, and for their commitment to health screening and 100 percent puppy registration. The AKC celebrates their success in and passion for canine sports. They are the pinnacle of the AKC community.