John Buddie on His Highs, Lows, and the Legacy of Tartanside Collies 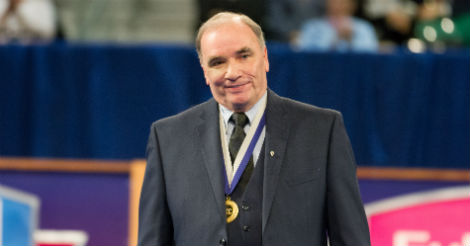 For John Buddie, owner-breeder of the prolifically successful Tartanside Collies and the 2015 AKC Breeder of the Year, there was never any doubt about his breed of choice.

“My grandparents emigrated from Scotland and Ireland and Collies were the only dog they’d have,” he recalled. “Then one day, when I was about 12, I was digging through some old steamer trunks and I found a picture of my father with a Collie and a yellow ribbon from the Bloomingdale Dog Show in, I think, about 1929. It was a litter that he had bred when he was a boy. It just caught my attention. I knew right then that I wanted to be a dog breeder.”

Buddie grew up in the Queens, New York in the early 1960s. A lack of space meant that he was limited to owning just three dogs to show.

“We lived in a row house with a back yard as big as one kennel run,” he remembered. “I used to take the dogs on bike rides with me to keep them in good condition. And since the first two were obedience trained, we would often go to a local park, where you could still let them off the lead, and we would play ball and have fun.”

Inspired by his mentor, the legendary Patricia Starkweather of Glenhill Collies in Chester Springs, Pennsylvania, Buddie dreamed of moving to more spacious accommodation and becoming a professional breeder and handler.

“I bought my first show collie from Glenhill, and I always used to say that when I grew up and graduated from college I was going to move to Chester Springs,” he said. In 1974, after leaving St John’s University in New York, Buddie got his wish. “I bought a house four doors down from Pat. But, of course, by then she’d moved!” Nonetheless, a warm friendship sprang up between the two, and eventually, they were to co-author several books about the breed.

The move to Pennsylvania provided Buddie with more space. Despite that, he decided to keep a smaller scale kennel, a decision he has stuck with over the years by never having more than 12 dogs at any one time and producing only two to three litters a year.

“When I started out there were still a few of the old-style kennels with up to 100 dogs. I wanted to concentrate on quality rather than quantity. Pat said of me once that I planned matings and pedigrees like the joint chiefs planned the invasion of Normandy!”

Buddie’s thoughtful approach was quick to produce results. While still in college he bred Ch. Tartanside the Gladiator, “one of only a very few dogs that won the Collie National three times. He was also my first Best in Show winner. His breeding was actually a three-quarter brother and sister. But those three-quarters brother and sister were actually crosses on two other dogs. And there were two particular dogs that really, I felt, had all the things that I wanted.”

Ch. Tartanside the Gladiator was not just a great show dog, but also an excellent sire. The early triumph turned to disaster, however, when it was discovered that Gladiator was the carrier of a serious eye disease in Collies, progressive retinal atrophy.

“It was devastating. We didn’t find out until he was maybe five. So I had to completely reevaluate my breeding program… And I was forced to ask myself: how serious am I about this? You know, I could have given up, or I could have started with another family of dogs. But I really felt like I wanted to keep the dogs looking the way they did. So I undertook the test breeding, which took four or five years to complete. And we finally came up with a non-carrier son of his, who then restarted the whole line so that everything still goes back to Gladiator through his non-carrier son.”

The experience taught Buddie an invaluable lesson. “I went from great success at a young age to a devastating low to a place where things started to balance out. I matured very quickly through that process. It teaches you a lot of humility, to keep a level head, and realize how much depends not just on skill, but also on luck. I think it’s best summed up by the saying, ‘fortitude needs luck.’”

Since then, Buddie and Tartanside Collies have produced a constant stream of winners, including more than 150 champions and 12 Register of Merit dogs. Collectively, the kennel’s sires and dams have produced 350 champions, among them multiple group, Best in Show, and National Specialty winners. Tartanside stock forms the basis for many of today’s top kennels. And Gladiator’s grandson, Ch. Tartanside Th’Critics Choice, was the Top Sire of the 20th Century. In 2014, Buddie received a 50-year membership pin from the Collie Club of America, and in 2015 he was named AKC’s Breeder of the Year.

Buddie attributes his dogs’ success to a rigorous and constant process of selection. “I think the way you become a good breeder is select, select, select. You select the breeding, the way you raise the puppies, you select the method you’re going to use, you select the feed. You select the temperament and deportment you like. A lot of people ask me why I don’t judge. And my answer is always the same: I do judge. I judge every single day when I walk out to the kennel and look at the dogs. And amazingly, a different dog wins most of the days.”

The attention to detail starts with the pedigree. “I like to look at a four-generation pedigree and see who the key individuals are. And I think your bitch lines are every bit as important as your sire lines. Every time I sit and hand write a pedigree and write a dog’s name, I visualize that dog in my head. And using that information lets me picture what was going to happen three generations later when I take granddaughters of this dog and breed them to grandsons of another. That’s pretty much how I use a pedigree – pictures in my mind of the characteristics I want to perpetuate.”

At his five-acre site near Pottston, Pennsylvania, Buddie also concentrates on connecting with his dogs as early as possible.

“As a breeder you have a much better chance of bonding with your dogs early. And I have a very strict philosophy. For me the greatest window of getting dogs used to life in general is from the time they are born to their 49th day. So when I have puppies in a pen I have some raised platforms, I have several different surfaces that they can walk on, there’s lots of toys. It’s to get them used to everything they might encounter. Do that an they’re good for life.”

Breeding In The 21st Century

Inevitably, in a career spanning over 50 years, Buddie has seen a lot of changes. “Back in the day, the average Collie was not nearly as good quality as it is today. [Breeders] fought a lot of health issues because they didn’t have vaccines and things to take care of them. In today’s world, people start with a much higher-level quality of dog than people did when I started. So you don’t have that much upgrading to do. On the other hand, I would say that in the 1970s, we had many important families of dogs and each family or strain represented particular characteristics. The dogs were very consistent and whatever the kennel was known for you could send your bitch to any one of these kennels and be bred to almost any of their dogs and get the quality you were going for. They bred true. Today, I think there’s a danger that people breed more to win than they do to create.”

In a similar vein, Buddie feels that today people seldom have time to look at other breeds at shows and that means they often miss out on important opportunities to learn.

“When I started most of the shows were still benched. So you were at the show for long periods of time. And I would look at the dogs and the people and I was always trying to learn. And I still am always trying to learn something. Even today I’ve taken an interest in learning about other breeds just because it’s interesting to study their history and why they’re constructed the way that they are and why the look the way that they do. I think that it’s important and it’s also fascinating.”

As befits a former schoolteacher, Buddie is happy to impart the knowledge he has gained throughout his career regularly holding seminars around the country. “The big thing, if I’ve learned nothing else from breeding, is that moderation is important. I’ve watched lots of different fads and trends evolve and I think it’s very important to stay away from anything that’s exaggerated. You know, sometimes you see dogs that begin to look like caricatures of what they really should be. More is not better.”

As for the future, Buddie continued, “You know, you can’t do this forever. I never really wanted to become a judge, but who knows maybe one day I will. But what has stayed in my mind is a thing several people who I loved and who helped me so much over the years said: You have the breed in your hands for now. You don’t get to keep it; you get to care for it. And make sure when you hand it back that it’s in as good a shape or better than when you received it.”