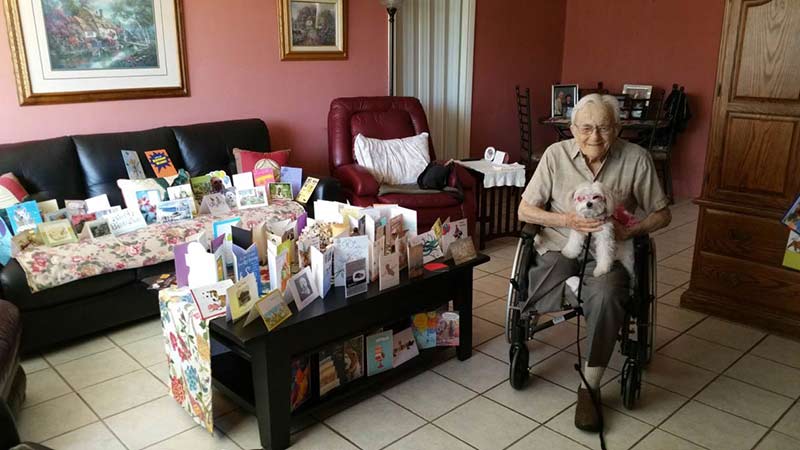 Being a certified therapy dog is the best life has to offer, especially to a dog who was found on the streets of South Phoenix, AZ, picked up as a stray by the county, and even put on the euthanasia list before being rescued by Ruby Ranch Pet Rescue and Sanctuary and then adopted by my forever family.

Today, I get to meet interesting people who have stories to tell and give me unconditional love and attention when I visit.  Mr. Alex is one such man.

I met him when I was doing a local fund-raiser for Pets on Wheels of Scottsdale (POW – my local therapy group) at Macy’s . I saw him being pushed in his wheelchair by his wife, and I just knew he needed to visit with me.  I put my paws on his one knee, and he invited me up in his lap.  I had a little hard time balancing at first because of his missing right leg, but we figured it out together.  Within the next few weeks, POW made the arrangement for me to visit Mr. Alex in his home.

I learned a lot on my first visit. He grew up in Culver City, CA, and then lived in Hollywood from the time he was a boy until the late 1940’s.  The fun part is that he was involved in the movie industry and MGM during these years and knew so many famous stars from the Our Gang Kids, to his best buddy Mickey Rooney, to Laurel and Hardy, to Walt Disney and even Frank Sinatra.

His first job was as a dishwasher for a diner called the Flying A where he earned 12 cents an hour.  Here’s the best part: the owner of that diner and gas station was Gene Autry.  On a future visit Mr. Alex showed me a special first dollar bill that he had carefully folded and kept in a safe place – a silver certificate dated 1935 – it was the first dollar he ever earned, and Mr. Autry gave it to him.  His stories were entertaining and endless.

Since I have a Facebook page where I share some of my stories about my work as a therapy dog, I started to share my Mr. Alex moments.  When I learned that he was turning 90 on Aug. 22, 2015, I asked my Facebook friends what I could do to make his 90th birthday memorable.  When a friend suggested she send him a birthday card, other friends wanted to do the same thing.  I was hoping to get 90 cards.

On Aug. 21 I arrived at Mr. Alex’s home with three wrapped gifts, lemonade, cupcakes, and a wrapped box containing 181 cards representing 36 states, Canada, New Zealand, Australia and the United Kingdom. All the cards contained beautifully written notes and many had photos as well. It was the best surprise ever!  He couldn’t believe that a little dog could do so much.

I continue to visit with him and hear more stories.  In fact, after his party, I decided to do an “Ask Mr. Alex a Question” post on Facebook.  The questions came pouring in. The next day I had nine pages of printed questions and so far, we have only completed two of the pages.  Being a therapy dog is the best life has to offer!