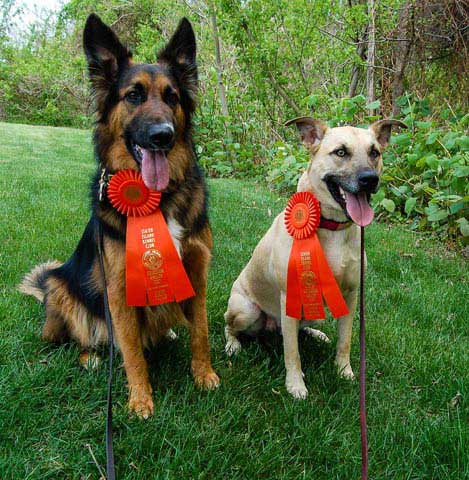 The winter brought a major achievement in the sport of AKC Coursing Ability as two dogs became the first All-American Dogs to earned the Coursing Ability Excellent 3 (CAX3) titles, meaning they have achieved the feat of passing the test 75 times. The new CAX3 title holders are best friends, and their owners are neighbors and friends.

Congratulations to Ingomar Di Mancini Torsione Pane CAX3 CGC (“Baker”), owned by Kate Renner of Washington, DC, who finished the title on Jan. 3, 2015, at a test held by the Greyhound Association of North Georgia in Pendleton, SC.

Iyong Tapat Kaibigan CAX3 (“Kai”), owned by Stephanie Markgraf of Washington, DC, finished the title the next day on Jan. 4 at the same event.

Coursing Ability Tests give dogs an opportunity to do what they love – chase things. A pulley system pulls white trash bags jerkily around a field, and dogs get to give chase, having loads of fun doing so!