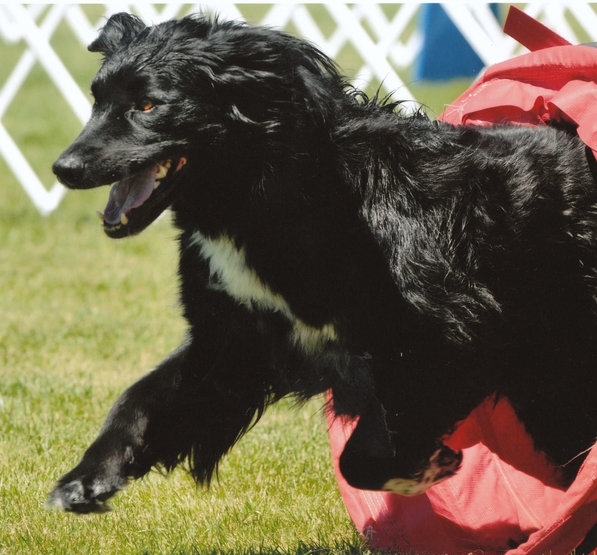 AKC Canine Partners is re-printing this story that originally appeared in the spring 2012 issue of the Canine Partners News newsletter in loving memory of Magi, also known as MACH Magic Carpet Ride and who passed away at age 12 in 2013.

Magi’s owners knew he was meant for big things because he never did anything half-way.

During the puppy chewing phase, most owners lose a few shoes, maybe some socks. Small change for Mr. Magi…

The Border Collie-Golden Retriever mix chewed through a wall and a water pipe, causing thousands of dollars in damage to owner Carla Williams’ home.

“Carla came home from work to find a flood of water coming out her front door. Magi had chewed the pipe running from the wall to the toilet and the small hole he made flooded the entire house to the tune of $15,000 worth of damage. Carla was freaking out and called me,” said Deborah Harpur, Magi’s co-owner.

“I got over there and she told me to take the puppy — she didn’t want him and couldn’t look at him. I told her I would take him but that I knew she’d want him back and if she did I had to be named co-owner. She agreed. A few hours passed and by the time we cleaned up some and I needed to go home, she had already changed her mind and decided Magi could stay.”

But Williams stayed true to her word, and Harpur, a professional dog trainer, became Magi’s co-owner.

Harpur knew that the energy that caused him to get into mischief also made him a great candidate for dog sports. Harpur just channeled all that spirit into training instead of chewing and digging.

“Magi is a dog that gives it his all and just wants to please you,” Harpur said. “He is a very good boy.”

Magi has had an impressive career of garnering agility titles and honors,  but his resume also includes many appearances in advertisements and serving as a celebrity “spokes dog.”

Harpur’s major focus is agility training and handling dogs – both her own and others’ – at agility competitions. But since she lives near Los Angeles, CA, she often seeks opportunities for her dogs to get parts in commercials, movies or television shows, and Magi has had his share of the spotlight.

Being a celebrity is not always easy. It was slow torture for the retriever mix when he had to appear in a commercial that was filmed next to a pond.

“He held out all day and at the end when I said ‘OK! Have fun,’ he ran and dove in that pond and swam and swam – he didn’t even care about the ducks,” Harpur said.

“We taught him how to ride a skateboard for a commercial once too. He was kind of big for it so that was a challenge. He was better at watching his younger housemate Scout ride the skateboard,” she said. “He is game to do most anything – he likes to go boating with his family, loves the snow, likes hiking and luckily for us, those are the kinds of things he’s done in his job as a doggie actor /model/ spokes doggie.”

Magi lives and plays with the Williams family, but loves to pack his bags and go on trips and work assignments with Harpur.

“I am extremely proud of Magi’s showbiz career.  I can never get enough of seeing his big, kind eyes shining in a print ad or banner,” Williams said. “He is a very special dog, full of life and intelligence and I think it always come through in his photos.”

His formal name, through AKC Canine Partners, is MACH Magic Carpet Ride , and Harpur said, in addition, he holds four agility championships in other venues.

He also made the first appearance by a mixed-breed at an AKC national event. Magi served as a demonstration dog at the 2010 AKC Agility Invitational in Long Beach, CA, and ran the finals course just before the actual finals competition started. (Mixed-breeds did not start competing at the national events until 2011.)

“He loves anything about agility. Carla can say ‘weave, weave, weave ‘to him in his sleep, and his feet will start running,” Harpur said. “Or if she says ‘Do you want to go with Deborah to the agility trial?’ he will go nuts and run around the house looking for me.”