This Scent Hound is Crazy for Coursing 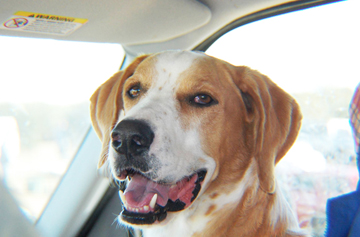 Randy is a 6 year old fox hound who Tammy rescued in June 2009. Tammy started working with Randy on obedience training when he was about a year old and then added on agility training a year later.

But then they heard about the sport of AKC Coursing Ability and Tammy discovered something that Randy really wanted to do. The sport allows dogs of all breeds and mixes to put their prey drive to work by chasing a lure pulled around a field by a pulley system.

Randy might be a scent hound but he is crazy for chasing the lure!

“We started doing coursing in 2012 and found out that he really loves doing that,” Tammy said.

He loves it so much that Randy has passed the AKC Coursing Ability Test 25 times and earned his Coursing Ability Excellent (CAX) title on Jan. 24, 2015, at a test hosted by the Houston Area Hound Association.

Randy competes in AKC Coursing Ability through the AKC Canine Partners program for all dogs, including rescues and mixed-breeds.