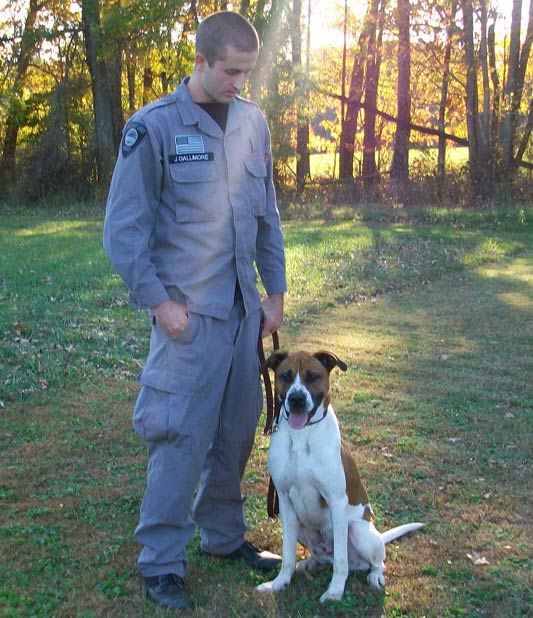 Did you think all police dogs were German Shepherds or Belgian Malinois? Not so! A mixed-breed dog who was abandoned by his owner is a valued member of a police department in North Carolina.

Officer Sammy was not always deemed law enforcement material. In fact, the first two years of his life were less than glamorous or even productive.

Sammy was a misunderstood and abandoned boxer-hound mix with too much energy and drive to be handled by the people who owned him and even the foster mom who worked with him. Sammy’s first owner dropped him off at a friend’s home while he was out of town, but never returned to get Sammy. The friends tried to keep Sammy but could not keep up with his boundless energy. They contacted Red Dog Farm Animal Rescue Network about Sammy and the group helped place him in a foster home. Soon, the foster was calling, reporting that Sammy needed professional training.

Shiloh K-9 Dog Training was contracted to evaluate Sammy, and their trainers were impressed. Their recommendation: Train Sammy for police dog work.

There were some problems, the greatest being that police units did not want a mixed-breed rescue dog on their force.

Finally, Walnut Cove Police Department, located in Stokes County, NC, gave Sammy a chance with Officer Justin Gallimore. The two completed police dog training and earned certification for narcotics detection and tracking. Today, Sammy is a valued officer whose skills resulted in five felony drug busts just in his first new months on the job. Sammy is now giving back to the community that gave him a second chance at life.

Did you know that mixed breeds and rescue dogs are part of the American Kennel Club? For information on joining the AKC Canine Partners community: /dog-owners/canine-partners/

Sammy has won honorable mention honors in the Law Enforcement category of the AKC Humane Fund Awards for Canine Excellence. For information on the ACE awards – /events/ace-awards/