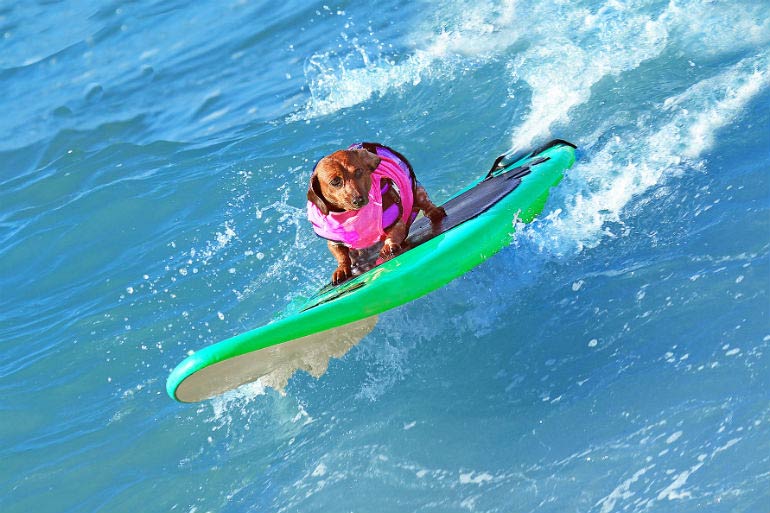 Coppertone was near death when California residents Heather & Lori Sims rescued her as a young puppy. They spent nights feeding the Miniature Dachshund with an eye dropper because she was too weak to eat on her own. The veterinarian gave her little chance of survival, but the puppy pulled through. The Sims say that fighting spirit has made the now 4-year-old dog a fierce competitor in many sports, including dock diving and earthdog. But Coppertone is most famous for her amazing surfing ability.

The Sims family has always loved to surf so they introduced the sport to Coppertone as a young pup. “With her survival instinct, this has made her an incredible surfer with no fear and inviting any challenge that is offered,” Lori said.

“This rugged surf had many competitors withdrawing from the competition, “ she said. “But not Coppertone. Coppertone has no fear of wipe out.”

She received a trophy for being the “Best Grommut Newbie” Surfer. Coppertone has won or placed in every contest and is believed to be one of the best small surfing dogs on the Pro Dog Circuit, Lori said.

The little Dachshund has been featured in hundreds of articles and videos and was featured on San Diego's float “Champion Dogs of San Diego” for her astonishing surfing skills.

“Coppertone has surfed some of the most prestigious waves that any surf dog could imagine from California to Florida to the golden sands of Mexico,” Lori said. “When not surfing, Coppertone also loves skateboarding, riding motorcycles, modeling, swimming, agility, dock diving, barn hunt, earth dog, rally and much more.”

She also is a registered therapy dog and performs many tricks.

Coppertone is enrolled in the AKC Purebred Alternative Listing (PAL) program with the formal name of  Coppertone Rock Stars Groupie JE DN CGCA CGCU. The PAL program is for purebred dogs who are not eligible for full AKC registration for various reasons, including being a rescue.

You can learn more about Coppertone at: