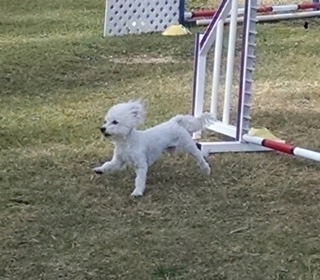 This is the final profile in a series on the six top mixed-breed dogs that received the invitations to compete in the 2015 AKC Agility Invitational. The annual event takes place Dec. 11-13 in Orlando, FL, in conjunction with the AKC/Eukanuba National Championships in conformation and the AKC Obedience Classic. Mixed-breed dogs, known as All-American Dogs, compete in AKC events through the AKC Canine Partners program.

Five years ago, one of Ronda’s veterinarian’s assistants rescued Casper, a 4 month old Maltese mix, as he was walking the streets of Sherman Oaks, CA.” I was asked if I wanted to adopt him, as they knew that I recently lost one of my dogs. After looking at his cute face, I couldn’t resist,” Ronda said. “I instantly enrolled him in the same classes that my other dog, Bam-Bam, attended which were obedience, tricks and agility. He did really well.” One day, Ronda’s instructors told her about a mock trial, but she said she was not interested. “But I was talked into it and after attending, I was addicted.”