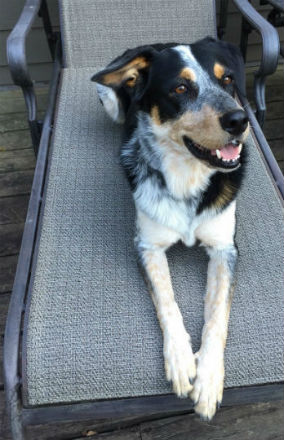 This is the first in a series on some of the All American Dogs who will be competing in the 2016 AKC Obedience Classic this weekend (Dec. 17-18) in Orlando, FL. Qualifying dogs will compete at all levels of AKC Obedience at the event, held in conjunction with the AKC National Championship and AKC Agility Invitational.

Susan tells us about Mavis: “Mavis is an Australian Cattle Dog mix.  We adopted her from an animal rescue group in 2013, and she is our first dog to compete with in AKC trials.  When we adopted Mavis, she was a little over a year old and had already been through at least two homes.  She was completely untrained, couldn’t walk on a leash, and was suffering from fairly severe separation anxiety.  We had to work with her several months to resolve the separation anxiety enough to leave her alone at home.  During this time, we started obedience training with her at the Little Rock Dog Training Club.  In the beginning, we had no idea that Mavis would become a competitive obedience and agility dog.  She now has titles in obedience, rally, and agility.  I compete in obedience and rally with Mavis, and my spouse Stacey competes in agility.  We are on an amazing journey and loving every minute of it.  Mavis also enjoys kayaking, going to the lake, and catching Frisbees.”