The Road to Getting the “Devil’s Doll’s” RAE Title 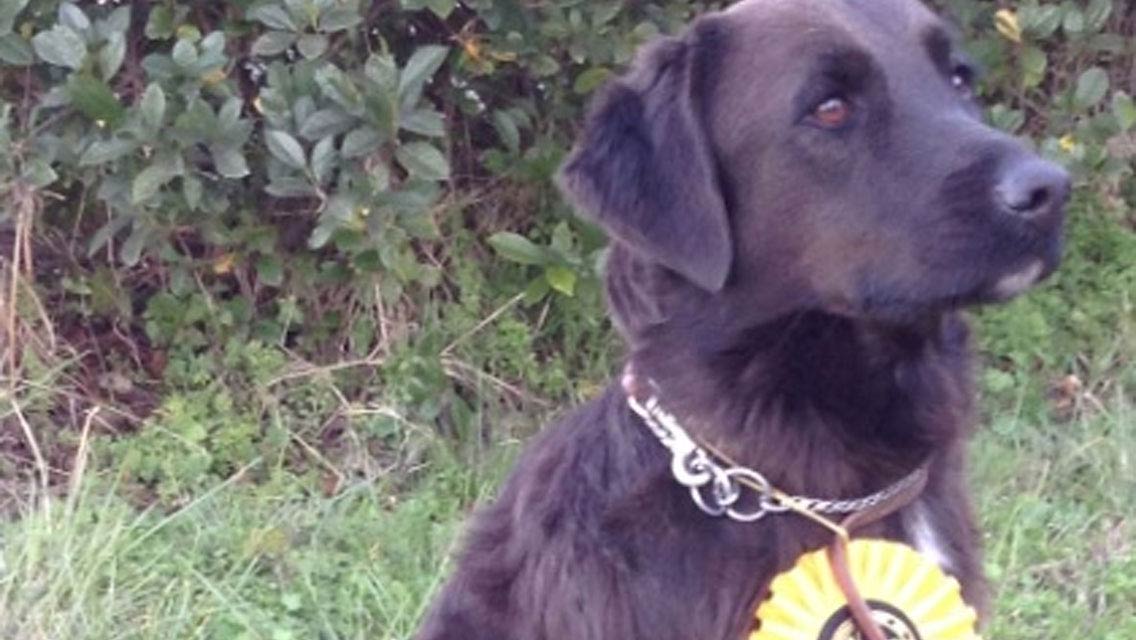 Thomas Stancliff of Manvel, TX, shared this story about his Labrador mix, Doll, and his and his wife Jeanne’s adventures with her since she showed up at their house three years ago. Doll’s formal AKC name is La Muneca Del Diablo RAE, and she recently earned the highest honor in AKC Rally. Doll competes in AKC sports through the AKC Canine Partners program for all dogs, including mixed-breeds and rescues.

Doll showed up in our driveway one day in July of 2012.  It was 103 degrees outside, and all of our dogs were inside in the air conditioning.

When we first saw her, she appeared to perhaps be a purebred Labrador Retriever puppy about 6 to 8 weeks of age.  We searched the area for someone that might have lost her and called all the local veterinarians and asked if they knew of anyone that had lost a puppy.

I asked my wife, Jeanne, if I could keep her, since when we were first married I had Labs.  She told me yes with two conditions:  She gets spayed and she gets trained.

Doll was a handful from the start, and I really did not have the time to work with her other than to put her on a leash and get her to walk with me.  In the meantime, she was running with a couple of our Collie puppies a couple of months older than her.  She kept them in beautiful condition for conformation competition.

When Doll was about 6 to 8 months old, my wife decided that I was not going to train her and the only way Doll was going to get trained was for her to do it.  She was training one of her collies in AKC Rally and decided to start training Doll.  She showed a lot of the traits of a Lab, but by this time it was apparent that she was a mix with something else. (Recent DNA testing shows that she is Labrador Retriever and Australian Shepherd).

She very hard headed, and she just loves running and jumping on everyone to greet them.  But, with lots of patience, she started understanding what was wanted of her and then quickly started learning her commands both by voice and hand signal.

Less than a year later, Doll finished her AKC Rally Novice title, but then came the off-lead work required for the advanced level titles.  She did great in traning class, but when they got to the shows, Doll would decide to go visit someone outside the ring and bust the class.  It took a lot of work to get her Rally Advanced title because she busted about every other show.  Doll then completed her Rally Excellent title in about six months after completing her Advance title.

When she started working on the Rally Advanced Excellent (RAE) title, she figured out that my wife could not correct her in the ring.  During the first half of the course, she liked nothing better than to go visit the judge or just wander around the ring.  Well she busted several times.  We figured the courses needed to be half-again longer and the first part didn’t count!  We were down to looking for the last double qualifying score for her RAE, and she was entered in four shows back-to-back.

The first show she did her thing and was busted.  The second show, she started to wander off and my wife reached out and corrected her.  It was an automatic bust, but the judge let them finish the course.  Doll got the idea, and on the third day she scored very nicely in both Excellent and Advanced to complete her title. This was on July 18, 2015, at the Beaumont Kennel Club show.  On the fourth day, they showed just for fun, because they were entered, and she scored in the 90s in both classes.

Along the way to her RAE title she actually was High Combined Scoring Dog at one of the Collie Club of Austin All-Breed Rally shows. Doll is now being started in agility training.