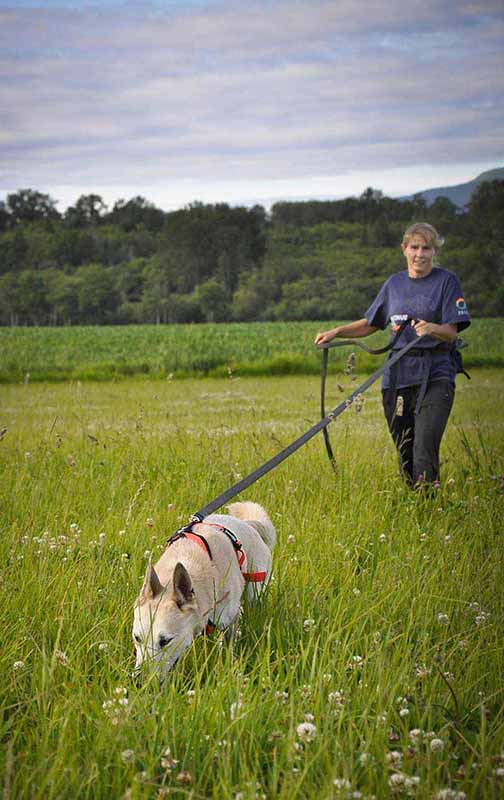 I got Cleo from a local no-kill shelter.  She was only 7 months old, and I was her fourth home.  I enjoy outdoor activities: hiking, backpacking, skiing, etc., and Cleo was friendly and athletic. But when I got her home, I discovered I adopted Houdini. She got out of every fence/kennel I had.  Cleo and my Australian Shepherd, Star, became friends almost instantly.  My relationship with Cleo took a little longer.

I started with some obedience lessons.  We did OK, and I started bringing her along when I took Star to herding class (not that I could leave Cleo at home and expect her to stay in).  She showed good instinct in herding, but with a lot of prey drive and with almost no relationship with me, I spent the time with her just working on walking on a leash near livestock.  I also started teaching her basic skijoring, thinking that would be fun.  Even though she had lots of energy and endurance, she really wanted to follow her nose.

Then she started growing up and not just following my older dog; she became more and more independent and less respectful of me.  Things got worse than when I first got her.  Someone recently described that time as Cleo looking like “a fish on a lure” and me looking nervous.  Luckily I had found a good trainer who wasn’t going to give up if I wasn’t, and she had experience with many types of dogs and dog sports.

Cleo was always people and dog friendly.  Our trainer said, along with positive obedience, we needed activities Cleo could be successful at and some “tough love” at home.  “Tough love” refers to “no free lunch – the dog works for everything it wants.” About that time, I also overheard someone talking about AKC Tracking in one of my classes.  I didn’t know anything about AKC Tracking, but I still couldn’t peel Cleo’s nose off the ground so I started asking questions.  I learned that AKC tracking is a dog following human scent to find “articles” like a glove. They recommended a couple of tracking books and an upcoming seminar.

Within a week I was at a local hay field with Cleo and the tracking book open on the hood of my truck.  That went well so I then went to the seminar.  Cleo and I were hooked.  The “tough love,” obedience, and tracking started working, and my relationship with Cleo started turning the corner.

At the time, All-American Dogs were not eligible for AKC Tracking, but that didn’t matter; this was fun.  Since I couldn’t enter, I volunteered at tests. By this time, our relationship had completely changed.  Cleo was now working in tracking and herding and was taking competition obedience and agility classes.  I work as a tug boat captain in Washington and Alaska and boarded Cleo at a kennel when I was out of town.  Unfortunately that gave her the opportunity to practice her Houdini skills.  So I started taking her to work with me, teaching her “boat rules” to live on the boat when we were in Alaska.  Thankfully, she doesn’t get seasick.

At my herding class, I met a couple from the local volunteer Search and Rescue (SAR) dog team.  I started asking them about their work.  They invited me to come to one of their practices as a guest.  After the training, they invited Cleo and me to join.  I was surprised. But they were seeing the dog I have now – a happy, friendly dog that loves to track – and I was still remembering “fish on a lure” days.

I decided to join the Summit to Sound SAR.  I went to work on field qualifications and certification for myself to become a ground searcher, and then for Cleo and me to become a trailing team.  I didn’t pay much attention to what was going on with All-Americans in AKC while I was doing this.

In January 2014, I was volunteering at an AKC Tracking Test and I learned mixed-breed dogs (All-Americans) were now accepted into tests at the club’s discretion.  A local club was having a test that included All-Americans, and I entered Cleo. In March 2014, Cleo achieved the first-level AKC Tracking Dog (TD) title.

Shortly after that, she got her AKC Canine Good Citizen title as part of our SAR certifications.  In June 2014, we tried an AKC Variable Surface Tracking (VST) test.  It was a hot day, but the real problem was the handler (me).  After crossing most of a common area on a college campus, Cleo looked to the right, and then indicated loss of scent.  There had been a party: tables on end, overturned trash cans, empty pizza boxes, etc.  I was thinking Cleo was looking at pizza boxes and encouraged her to go straight (several times) until I heard the whistle, ending our run.  In the fall, I then discovered, after finding people with goodies at the end of Search and Rescue training tracks, Cleo didn’t think vinyl articles (used in tracking tests) were very important.  So we had some more training to do.

In January 2015, Cleo had her first find (a live find) on a SAR mission, and two months later, Cleo and I passed our National Search Dog Alliance, Wilderness Trailing, Level II certification, in Libby, MT.  I then entered the Spokane Dog Training club’s AKC Tracking Dog Excellent (TDX) test in Sprauge, WA. Our entry made it into the test, and on May 3, Cleo passed her AKC TDX.

Today, Cleo and I are continuing Search and Rescue service.  We are also looking forward to again trying an AKC VST test and maybe an AKC obedience trial.  Cleo is only 6 years old, and we hope to have many fun years of tracking adventures in the future!