Teenager Excels at AKC Agility with Her Rescue Dog 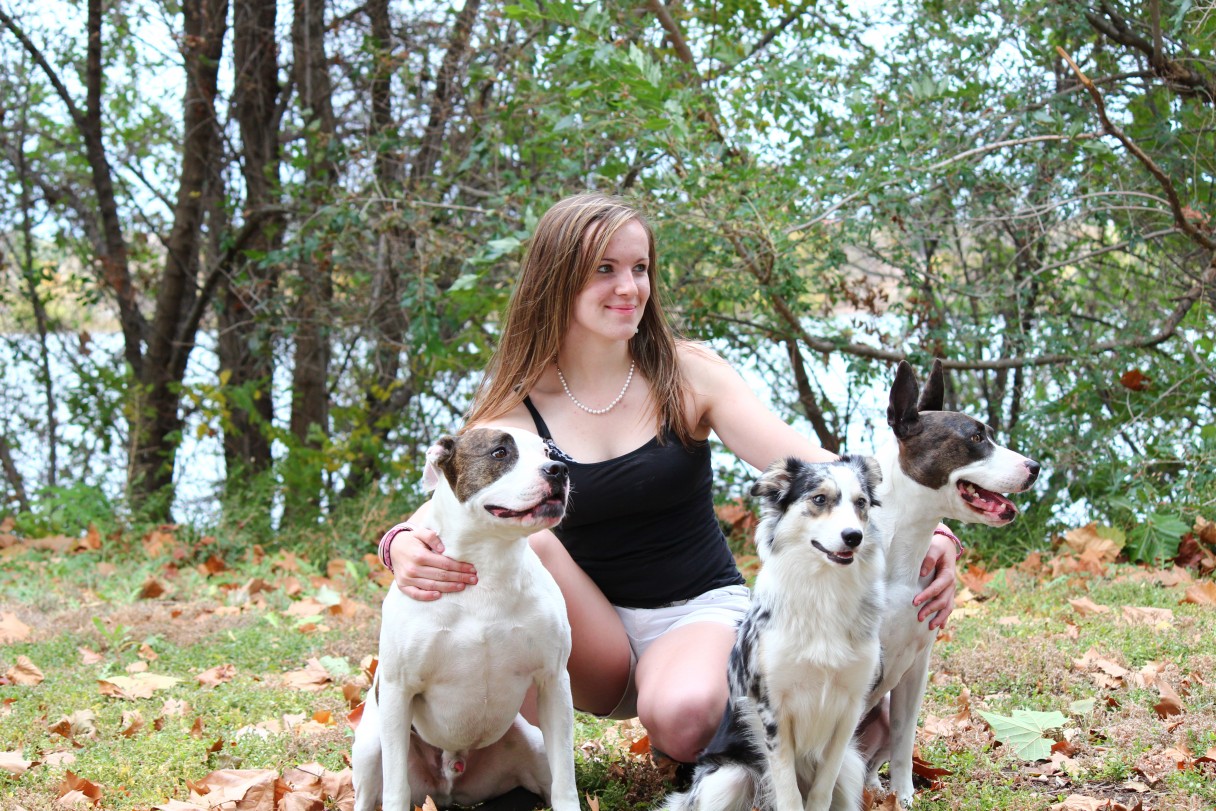 JuliAnna Munden is a lifelong dog lover, but training classes and competitions never occurred to her.

A bark in her backyard changed all that.

One day five years ago, JuliAnna was trying to study but a persistent bark outside her home in Pasco, WA, kept interrupting.

“I went out back and saw this dog inside our 6-foot fenced yard, barking at something on the other side.  I was pretty timid about going up to her.  I didn’t know anything about her,” JuliAnna said. “But then I discovered what she was barking at was a 6 to 8 week old puppy.  Well, it appeared that she had taken her puppy out for a little stroll and decided that she liked our place.”

The family took the mother dog and pup in while they searched in vain for their owner.

“We had her scanned for a microchip, but none was found.  We put up signs and notified our local animal shelter,” JuliAnna said. “Finally, after some persuasion, I talked my parents into keeping both her and her pup.”

The bully breed mix, Hype, and her son, Tag, settled into the Munden household and were very loving, but also very energetic, and that energy often transferred into getting into trouble.

“I would come home from school daily to find the house destroyed.  They actually ate a whole couch.  We came home, and the whole center was missing, clear down to the floor.  Mom and Dad said that if I wanted to keep her she would have to be trained.”

That led JuliAnna to the Columbia Basin Dog Training Club, where her only goal was teaching Hype some manners and control.

“I started out with the Home Companion class and, after the first class Hype just seemed to be more relaxed.  The destruction started decreasing.  It was almost like Hype needed something else to think about and to know what was expected from her.”

Then the club members invited JuliAnna and her family to one of their agility trials, and JuliAnna immediately knew that Hype was meant for bigger things.

“From that point on, I was hooked on agility.  We started as soon as the next lessons were offered with the club.  We found that Hype loves to work.”

Hype is now about 6 years old and JuliAnna is 18, and the two have competed in Agility, Rally, Obedience, dock diving and an occasional 4-H Showmanship competition.

Agility has been their favorite sport, and their accomplishments are impressive.

“Hype is always willing to give whatever I ask of her a try.  She learns so very fast,” JuliAnna said. “My mom seems to think that she will come home from work one day, and Hype will be doing quantum physics.”

Hype’s puppy, Tag, has not been any slouch at agility either. He has earned several titles, but really prefers to be a family companion and so has had an early retirement from competition.

JuliAnna is a senior at Pasco High School and will be moving this fall to Vancouver, WA, to attend Washington State University. She plans to complete bachelor’s and master’s degrees in elementary education and to become an elementary school teacher. Hype will be moving with JuliAnna and they plan to continue agility, as time allows, while she attends college. In addition to Hype and Tag, JuliAnna shares life with her parents, Scott and Christy Munden; sister, Katie; plus the family’s menagerie including a third dog – “a Papillon mix who thinks he’s part pitbull,” a Border collie, several cats, seven birds, two Mississippi map turtles, and several fish.

JuliAnna and Hype often participate in public demonstrations so Hype can serve as a public ambassador for bully breeds.

“I really like that Hype is a mixed-breed dog because many people wouldn’t have given her a chance. She is a role model for not only mixed-breed dogs but also for bully breeds,” she said.

“We love to take her to the different agility and obedience demos our dog club puts on.  Hype always gets the best reactions from people.  Most people are very timid of her at first.  But after meeting her and seeing what she can do, they are amazed.  I always tell people that it is amazing what a little love and training can do for any dog.”

Rescue dogs and mixed- breed are eligible for AKC sports through the AKC Canine Partners program, including Agility, Rally, Obedience, Coursing and Tracking. Get more information.