Teach Your Dog to Catch a Disc! 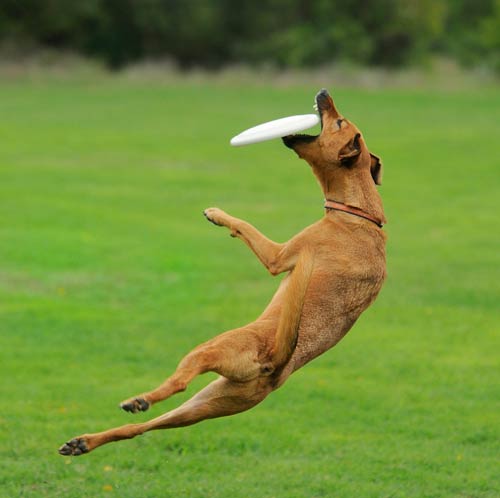 Heidi’s Bella RA THDD loves to play disc and is quite accomplished at her favorite past time, as you can see by the photo of her graceful leap to make that catch. Bella’s owner, Heidi Armstrong of Austin, TX, taught Bella to retrieve, starting with a tennis ball when Bella was just a puppy. Bella is enrolled in the AKC Canine Partners program for all dogs, including mixed-breeds and rescues. She holds titles in AKC Rally plus the AKC Therapy Dog Distinguished title for making more than 400 visits to help others!

We asked Heidi to share the story of how she taught Bella to catch a Frisbee and give you some tips on how to get started in this fun activity:

I found her in a maze of homeless puppies and dogs at the Town Lake Animal Shelter. I longed for a Frisbee dog, a companion to do agility with, and a therapy dog to share with people in need.

That day I hit the dog lottery.

Shortly after adopting the puppy, I found Bella vigorously “skinning” a tennis ball. She looked up at me with a yellow tennis ball fuzz beard, her tail wagging so energetically it almost knocked her off balance. She was about 10 weeks old.

So we started with a tennis ball inside. I'd throw it a few feet. She'd clumsily chase it and bring it back.

Bella and I communicate primarily through my facial expressions and praise. I turn on when she's offering a behavior I appreciate, and vice versa.

The second she turned around to look at me, I praised her, and as she closed in on my hand, the reward intensified. This anchored her drive to both retrieve the ball and bring it back, placing it in my hand.

On the rare occasion she refused to return the object, I emotionally turned off and walked away. She quickly realized in order for me to stay and play the game, she must return the ball.

We mastered a tennis ball retrieval in short order, then we moved on to a disc.

We started with a bright pink floppy soft disc. At the time, there weren't smaller versions, so Bella often stepped on the disc, which halted her forward motion and sent her into a spectacular flip. But puppies are like rubber, so she bounced right back up, continuing the game unscathed.

I started her on a disc the same way we started with a tennis ball, only we moved outside. I'd toss the disc just a few feet; Bella bounded through the grass to retrieve it and bring it back. Because we had a retrieve foundation from the ball, it seamlessly transferred to the Frisbee.

We played with a soft disc for about two years when I decided I'd like to train her to retrieve a hard disc specially made for dogs. It turned out to be quite a challenge for her to accept a hard disc.

Over and over she'd chase it, sniff it on the ground and walk away.

I talked with my dog behavior mentor, the late Lee Mannix, and asked him how to proceed.  He said, “The disc needs to have value to her. Right now it has no value. Feed her out of it every night. Make good things come from the disc.” I followed Lee's directions for two weeks and tried again.

This time she ran after and retrieved the hard disc with the same intensity as the floppy disc.

Though she still prefers the floppy disc (it's much easier to grab and shake), she'll still run for a hard disc.

Playing Frisbee has brought us both years of joy, an escape from everyday life, and a reason to get out and strengthen our relationship.

Establishing games you and your dog enjoy creates a stronger bond, gives you both an outlet for play and stress relief, and a vehicle for training other behaviors. For example, I rarely used treats while training in agility. I simply pulled out the disc because it was a more valuable reward than treats.

What I treasure most about playing Frisbee with Bella is that I can play with her no matter my physical capacity. I had to stop competing in agility with her in late 2010 following a skiing accident in which I suffered a rare knee fracture and an even more rare complication. While we've returned to the show ring doing rally, agility is off the table.

While it's a different form of teamwork than agility, Bella can run and jump as much as she wants, chasing her Frisbee with unabashed delight.

The time you invest in teaching your dog games — especially Frisbee — will return to you in the form of joy (both dog and human). Get a Frisbee and get out there. It'll be one of the very best things you'll do with your dog!