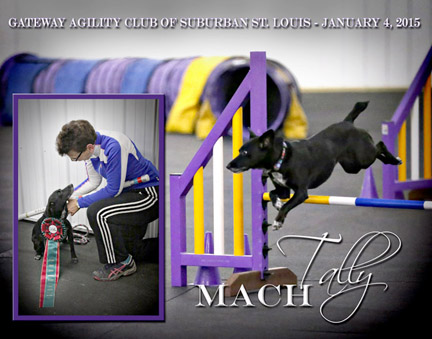 Tally was found on a farm in Iowa and was fostered by Protégé Rescue.

Mary adopted her in 2010 when she was about 4 years old to be a companion to her Jack Russell Terrier. Mary was already training her terrier in agility so started training Tally also.

“She quickly caught on to the game and was running advanced level courses in no time in my back yard.  But she was very fearful of people and crowds and getting her to run with me at trials was very difficult,” Mary said. “She advanced to Excellent (most advanced level of AKC Agility) and then completely regressed.  I almost gave up on her but when I realized she wasn’t a bad dog but rather a scared dog, we made progress.”

Within a year of confidence building, Tally had won the AKC’s highest honor in AKC Agility – the Master Agility Championship –  on Jan. 4, 2015, at the  trial held by the Gateway Agility Club of Suburban St. Louis.

“I am very proud of my girl and all she has overcome!” Mary said.