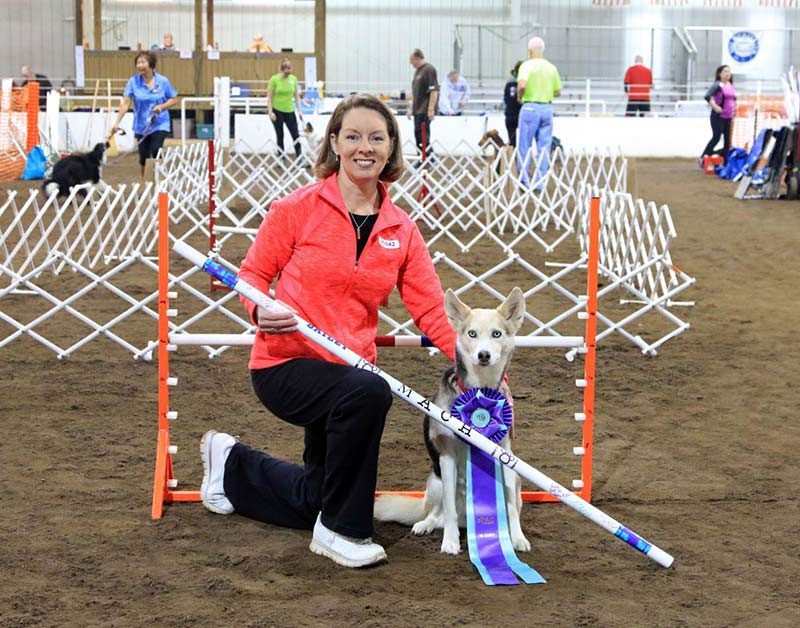 MACH Bailey Gaines MXB MJS is a talkative husky mix who loves agility and recently achieved the top honor in AKC Agility – the AKC Master Agility Championship. Christine Gaines adopted Bailey from a shelter when the pup was 5 months old and only started agility training as a way to bond with her new companion. Christine tells their story:

Bailey is a very talkative husky mix and was adopted from Partners for Pets in September 2007 when she was 5 months old.  Once she completed her obedience training in 2008, we began agility training simply as a way to bond.

Bailey is my first agility dog.  Initially we had no plans to compete, but after training for two years and then AKC starting the Canine Partners program, we decided we should enter a trial for the fun of it.

Bailey absolutely loves to play agility. Her eyes light up and she gets an extra bounce in her step when it is time to play.  Although it took us a while, the journey to MACH has been awesome and I could not have had a better partner than Bailey.

We accomplished MACH on Nov. 13, 2015. The trial was hosted by the Tri-County Agility Club (TAC) in Lake St. Louis, MO, at the National Equestrian Center.