Special Tribute to a Retired Competitor 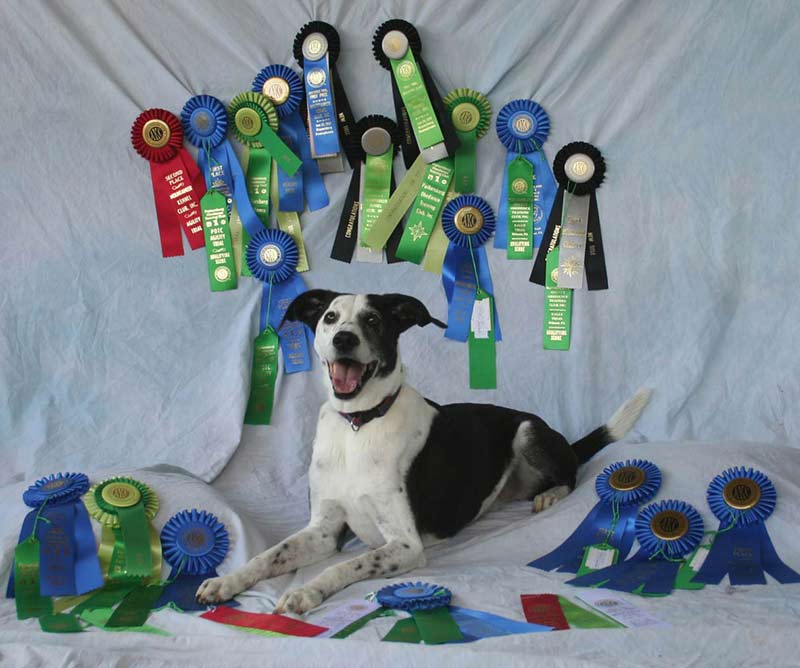 Sheila Dempsey of Jane Lew, WV, wrote this special tribute to her amazing multi-titled All-American Dog, Patches, when he retired from competition at age 13 two years ago. Patches is now 15 ½ years old and enjoying his retirement, Sheila says.

Patches and I competed in the show ring for 13 years together. We ended our career together with our 13th AKC title earning our Rally Advanced Excellent (RAE) title June 7, 2013 (the highest title in AKC Rally).

Patches is an All-American Dog, who was found in a pile of leave along a road on a cold December day in 1999. I acquired him a few weeks later at around 10 weeks old. I believe Patches is a Border Collie/Greyhound mix.

He and I bonded quickly, and he was a willing and eager partner. As my third dog, I decided to train him completely off leash.  He loved obedience; we also became involved with agility and rally obedience, both of which he also enjoyed.

We have titled in five venues over our career in addition to the American Kennel Club, including AMBOR (American Mixed Breed Obedience Registration) and MBDCA (Mixed Breed Dog Clubs of American). We attended the AMBOR National Championship in Indianapolis, IN, in 2002 and earned 10th in the Novice Division.  We have traveled many miles and to many states together and met some wonderful dog folks, some of whom we still stay in contact.

In 2010 when AKC allowed us to start showing our All-American Dogs, we were ready.

We were the first team in West Virginia to title and only one of three who titled in obedience, rally and agility that year.  We were one qualifying score away from earning out 11th title in 2010 when disaster struck. In October 2010 Patches had a disc collapse (at home while playing with his two sisters) and had to be rushed to Pittsburgh, PA, for a MRI and emergency surgery. He did make a full recovery, but this ended our agility career.  With our neurologist’s permission, we completed our AKC Obedience Beginner Novice title in June 2011 and began work on our RAE title.

Plans were to retire him in September 2012; again an emergency spleenectomy was required (two days before our last two shows to finish our RAE). I waited until early 2013 and thought we would try one show to see how he did.  He did well, so I entered two more trials.  I have published a K9 cookbook as a fund-raiser to help pay off these veterinary bills. I create, bake and sell dog cookies as a way to pay for entry fees now as these medical bills have depleted the “dog show” fund in this household.

I am grateful that our Lord saw fit to allow us to complete our BN and RAE titles before our show career ended after his disc injury (he was paralyzed from the neck down after the accident) and his spleenectomy. Our neurologist said very few dogs recover as completely or as quickly as he did. It is hard to keep a good dog down.

Our last trial was in Delmont, PA (which is where I had planned to retire him in 2012) at the Westmoreland County Obedience Training Club; this was a wonderful day for us. We did not place, but earned scores of 96 and 94 (out of a perfect score of 100).

We were both happy and did not stress. We were competing against much younger dogs, and I was so proud of him.  I did cry when we completed the RAE title.  I had wanted to finish our title here because this club over the many, many years of showing my All-American Dogs had always welcomed me with open arms and helped me with any training problems I had. I have earned many of my AMBOR and MBDCA legs at this club’s matches, run-throughs and Show-N -Go’s.

These are BIG PAWS to fill, and Ginger (my Beagle) will have to work hard, as she is now my show dog. I have another rescue All-American Dog, a Border Collie/Sheltie mix, that will be coming into the show circuit in a year or two.

Each dog is always special, but Patches and I had an extra special bond, and I will always remember our journeys, destinations and goals we accomplished in 13 years together.  For years we were the only All-American team in West Virginia that was competing for titles (along with his All-American sister Cinnamon who passed over the  Rainbow Bridge four years ago.

Patches is enjoying his retirement and being a couch potato, doing what he wants, when he wants. He has certainly earned his newest title: MXCP (Master Excellent Couch Potato).