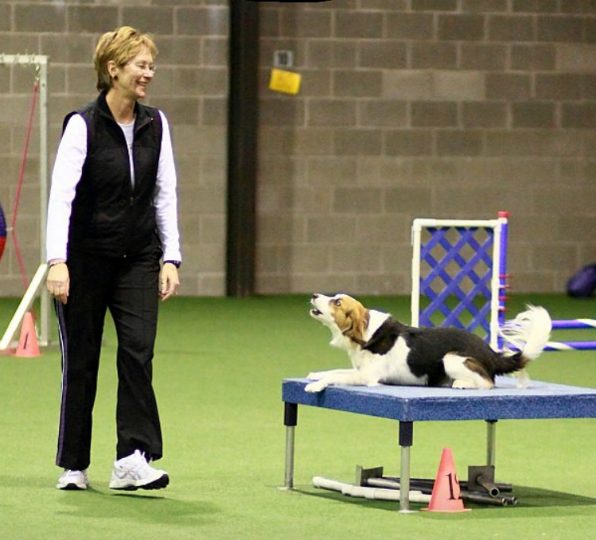 Annie was adopted from a local shelter in the summer of 2007, estimated to be about 6 months old.  She was a sick puppy with kennel cough and a nasty case of whip worms.

“However, once we got her health back on track, she began to amaze us with her ability to quickly and effectively solve problems and accomplish everything we challenged her to do,” Karen said. “She earned her first agility championship title in September 2009 and never looked back.”

As Annie approached 9 years old, Karen decided to move her to the AKC Agility Preferred program so that she could jump a lower height, hoping that it would be easier on her body and extend her ability to continue to enjoy agility longer.

Annie appears to be a spaniel-Beagle mix – which Karen calls a “Speagle.”

“While I had not planned to attend the 2016 AKC National Agility Championship in Tulsa this spring, when I found that Annie was qualified, I decided to go.  What an experience!  She made it to the finals, barking all the way!  Our next AKC trial was April 23, and she earned her 20th Double Qualifying score to finish her Preferred Agility Championship.

“What a journey it has been to share a life with this special girl.  I look forward to many more times of experiencing the joy it is to compete with Annie!”

Annie is a member of the AKC Canine Partners program for all dogs, including mixed-breeds and rescues.