Shelter Dogs Give Support to Veterans Thru Collaborative Program 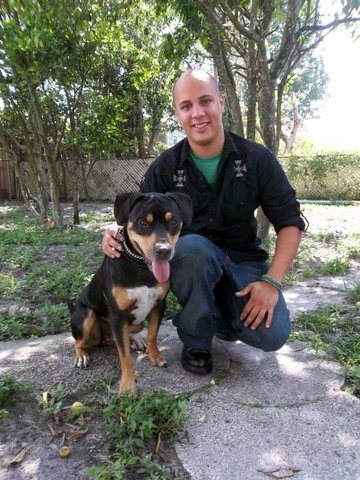 Buster’s owners did not want him because he kept running away.

Rather than provide secure fencing or a kennel, they dumped him at the shelter.

Today, the 3-year-old Labrador mix still specializes in escaping without jumping over a single gait or slipping through any open doors.

Buster helps a war veteran escape from his bad memories through a program called Paws of Freedom.

The effort to help veterans with Post Traumatic Stress Disorder (PTSD) is a pilot project of the Veterans Administration of Daytona Beach, FL.

While there are similar programs around the country, Paws of Freedom is unique for its collaboration with another community program that also helps people through interaction with dogs.

The Paws of Freedom candidates are first trained by inmates in the Prison N Pups program, which is coordinated by the West Volusia Kennel Club and Halifax Humane Society. The inmates train shelter dogs to make them more adoptable.

“The dogs trained by Prison Pups N Pals are given a second chance, which is something a lot of people can relate to, including veterans,” she said. “These dogs sometimes have a traumatic history.  For the veterans receiving the dogs, there may be common ground.”

Muni-Sathoff, a mental health social worker with the Veterans Administration, has counseled many soldiers as they returned from the Middle East. Many complain of problems stemming from PTSD, including nightmares, flashbacks, poor sleep, problems concentrating, depression and anxiety.

A lifelong dog lover, Muni-Sathoff  became interested in therapy dog work while in graduate school. She adopted a stray dog named Roxie during that time and took her to training, in hopes she would be certified as a therapy dog. “But she was just too skittish to do the job,” she said. “She has made a wonderful house pet and is still with me today, now old and blind.”

Sathoff started work with the VA in Daytona Beach in March 2011 and shortly after heard about the VA National Innovation Competition that seeks ideas for new programs. She decided to put together a proposal to help veterans through the companionship of dogs.

VA employees entered more than 4,500 ideas in 2011, and judges selected 30 around the country. Paws of Freedom was a winner, and the year-long pilot program launched in October 2011. “I thought this is meant to be,” Muni-Sathoff said.

The Halifax Humane Society and West Volusia Kennel Club first identify potentially adoptable dogs that would benefit from training. The dogs move to the Tomoka Correctional Institute where they live with inmates for seven weeks. Inmates, selected as trainers, live with the dogs 24-7, socializing and teaching basic obedience skills through daily classes with kennel club volunteers.

The dogs are much more adoptable upon graduation (Prison Pups N Pals has a 100 percent adoption rate). The inmates benefit by having a sense of responsibility and learning animal care skills that could help them find future employment.

With the addition of Paws of Freedom, kennel club members and inmate trainers are on the lookout for dogs that would make comforting companions for war veterans. Two dogs per session are earmarked to train as PTSD therapy dogs.

Buster now lives with a veteran who reports that he is “thrilled with Buster. He says Buster follows him all around the house and never lets him out of his sight,” Weigel said.

Like Buster, Busch was surrendered to the shelter by his owners. They said they could no longer care for the large-boned black-tri dog. Today, he is living with Navy combat veteran Jose Flores-Riutort, who reports Busch is “the best friend I ever had.’

“He’s a good cuddle buddy, always paying attention to me and he does his job,” Flores-Riutort said. “When I get angry, he gets my attention.  He jumps up or puts his paw on me to distract me, and it helps remind me that I’m no longer in the military.”

Those dogs selected for Paws of Freedom remain in the Prison Pups training program an additional seven weeks to learn commands to prepare for their new roles.

The inmates teach the dogs to search a room for intruders and alert by barking.

“These guys are up checking the house three to four times a night so it’s a biggie if the dog can check house for him and put his mind at ease,” Muni-Sathoff said.

Another command is “block.” In the case of an anxiety attack, the dog stands between the veteran and other people, making him or her feel more comfortable.

Training does not end once the dogs go to their new homes. A volunteer mentor conducts home visits to continue the dogs’ training and help both dog and owner adjust to life together.

The mentor is Vinnie Bosco, a military veteran and former breeder of Labrador Retrievers.  Bosco said he did not hesitate to volunteer when his mother, a VA social worker, told him about the program.

“The dogs provide companionship, unconditional love and may serve as a means by which the veterans can address the avoidance associated with PTSD,” he said. “There’s no risk involved in sharing your trauma with a dog, no judgment… only acceptance and understanding.”

Bosco trouble shoots any issues with the dogs at their new home and works on advanced skills, such as teaching the dog to turn on a light switch if the veteran has a nightmare.

Just providing every day care for the dog also is therapeutic, Muni-Sathoff said.

“The dogs need to go out and get exercise, and it is good for the owner to get out of the house and walk the dog – it is socialization for dog and owner,” she said.

The VA mental health department refers veterans to Paws of Freedom. They must have expressed interest in a dog and also have symptoms of mild to moderate PTSD.

Muni-Sathoff stresses that someone with severe symptoms would be referred to a certified service dog agency. The Paws of Freedom dogs are companions – not service dogs.

Most people think of PTSD victims as having had recent combat experiences, but the symptoms can be long lasting. A recent recipient of a Paws of Freedom dog is William Van Dyke, who is a Vietnam War veteran.

In May, Truex, a black and white dog who always has a smile on his face, joined Van Dyke’s household and has become his best boating buddy.

“I knew it would help me but I had no idea what a difference a dog would make,” Van Dyke said. “All my friends are asking why I’m so happy, and I tell them I have a dog.”

More information on the programs – http://www.halifaxhumanesociety.org/ppnp.html