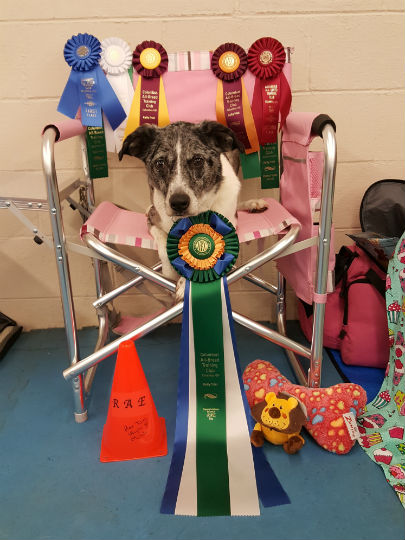 Penny for Your Thoughts RAE MX MXJ MJB XF T2B CAA CGC, owned by Mandy Parkins of Westerville, OH, was a shelter puppy who Mandy picked out at age 8 weeks. She had never shown a dog, but Penny was so smart and energetic that Mandy thought she better give her a job and started training her. The team recently earned the top title in AKC Rally – the Rally Advanced Excellent (RAE) title. Mandy tells their story:

Mandy adopted Penny from a rural county shelter in southern Indiana in 2009 when the dog was just 8 weeks old.

“She has always been very active and smart so I knew I wanted to show her.  Having never shown dogs before, Rally seemed like a good place to start,” Mandy said. “We were completely self-taught.”

Penny earned her first AKC title, Rally Novice, in 2011.  After that, they went on to dabble in Agility and “we were hooked.  Rally may have taken the back seat but we never completely quit and never will.  Rally will always be special as it is where we stepped into a show ring together for the first time.”

“She is an amazing dog, and I couldn’t imagine life without her.”

Penny is a member of the AKC Canine Partners program for all dogs, including mixed-breeds and rescues.