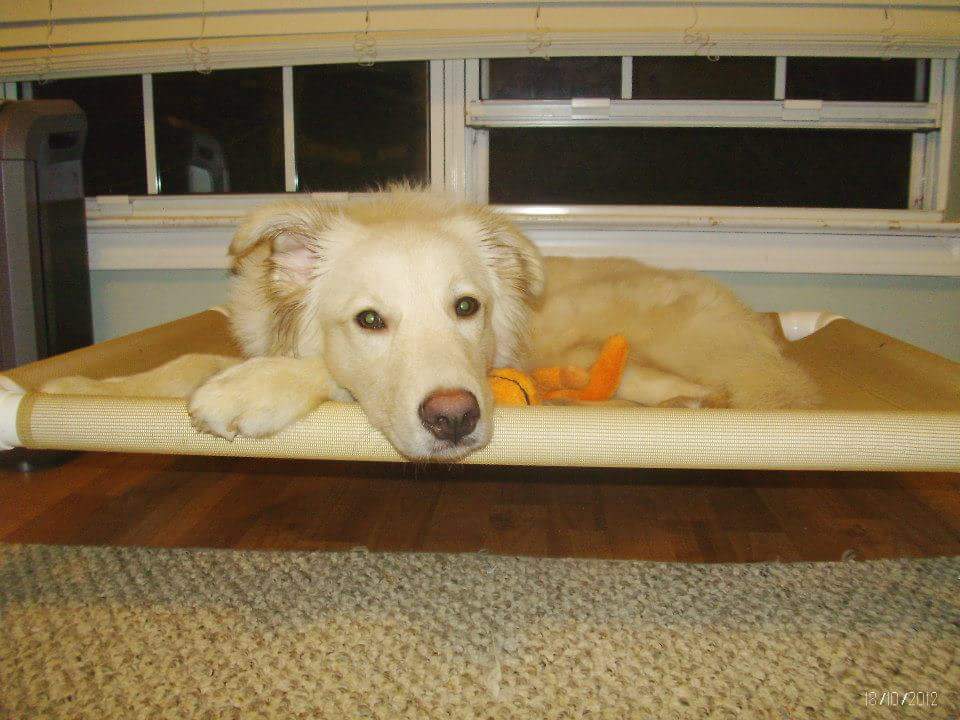 June 2013.  I was settling in for the evening with my two Golden Retrievers who had just enjoyed a fun weekend in the Blue Ridge Mountains at an obedience trial.  Before the night was over, I would find myself with one less golden as a result of bloat.

That tragic loss began the journey that led me to my AKC Canine Partner dog, Mori.

Between June and October of that year, I had visited many shelters looking for the “perfect” dog.  I wanted an obedience competitor and a therapy dog.  I had even spent every day for two weeks visiting a shelter and getting to know a shepherd mix who was perfect—he had passed all my tests.  I even had him doing perfect fronts and eye-contact heeling on the first visit.  Yet, there was something that kept me from bringing him home.

One sleepless night I was on the internet searching for the perfect dog.  There he was – Drover, a retriever mix in a shelter an hour away.  It was a Thursday.  I started trembling.  It was a work day and I knew by now that shelters don’t hold dogs.  When it comes to people, my boss wasn’t necessarily a dog lover—how was I going to ask to leave early to go look at a dog?  I found the courage, and approval was granted to leave early that day.  On the way to the shelter, I called and pleaded with them to not adopt him out until I could at least look at him.  Of course, I didn’t get a firm answer either way.  When I arrived at the shelter, a sign was posted on his run “Adoption Pending.”  My panic subsided when they said they had posted that sign to wait for me.

The shelter worker led me to a dog who wasn’t nearly as attractive as his picture.  We went into a play yard to get acquainted.  I had my temperament obedience tests at the ready.  The dog ran circles and lay down.  When I threw a ball, he would run after it, come back without it, and lay down.  When asked to “sit,” he would comply but in short order he would lie down.  The group long sit exercises flashed before my eyes.  “Well, there goes THAT one,” I told myself.  The shelter information suggested that he would not be appropriate for children.  “There goes pet therapy,” I surmised.

I stared at the scruffy dirty dog lying at my feet, uncertain what to do.  He failed all my tests.  He was not the match I had hoped.  My heart sunk.  It was at that moment, I heard God tell me, “Wait a minute, Patrice.  I accept you as you are!”  I chose to listen and signed the papers to adopt the imperfect.  He was scheduled for neutering.  I could bring him home on Monday.

This “Drover” would be my fourth dog, yet the first dog that I could ever have the privilege to name.  He was male.  He had taught me a lesson about acceptance.  And so that weekend, the internet search began—to find a male name that meant “teacher” or something similar.

Moriel is Hebrew for “God is my teacher.”  The dog I would bring home would be renamed Mori. Whatever path in life this dog and I would find together, God would be our teacher.  He might fail at obedience.  He may never be registered as a therapy dog.  I accepted him as he was.

March 2016: Sparkle City’s Mori is a registered therapy dog bringing comfort to children ages 5 to 18 in an emotional care residential treatment facility.  Mori is one of the favorites.  He uses his “lying down” skills and allows children to rest their heads on him as if he were a pillow.  They enjoy the tactile comfort of caressing his soft fluffy fur.  They love watching him do “tricks,” which is really just putting his obedience competition skills on stage.

In the obedience ring, he excels because he is worried about being wrong.  He has a tender spirit and learning how to handle him is a challenge to me as a trainer.  As we have climbed the ladder, it has been a joy to watch him grow in confidence each step of the way.

When we first entered Novice, his recall, motivated by panic, was like a rocket.  By the time we earned our CD, he was leading his class with each performance.  When we moved into Open, the panic speed returned, especially on the retrieves.  By the time he earned his CDX and we were ready to focus on Utility, he was standing in the placements in Open B next to Obedience Trial Champions.  We are currently navigating our way through confidence building in the Utility B ring with one leg on our score sheet.

Also, my curiosity got the best of me.  A DNA test reveals that Mori might not even be a retriever at all!  The test reports:  50% Great Pyrenees, 37.5% pure All American i.e. too much mix to identify, and 12.5% Rottweiler!  This knowledge explains some of his behaviors and has given me insight into how to best approach his training.

Our journey continues.  I still don’t know how far in obedience we will go.  But I know one thing my Canine Partner taught me: When you accept the imperfect, you just might find perfect right in front of you.