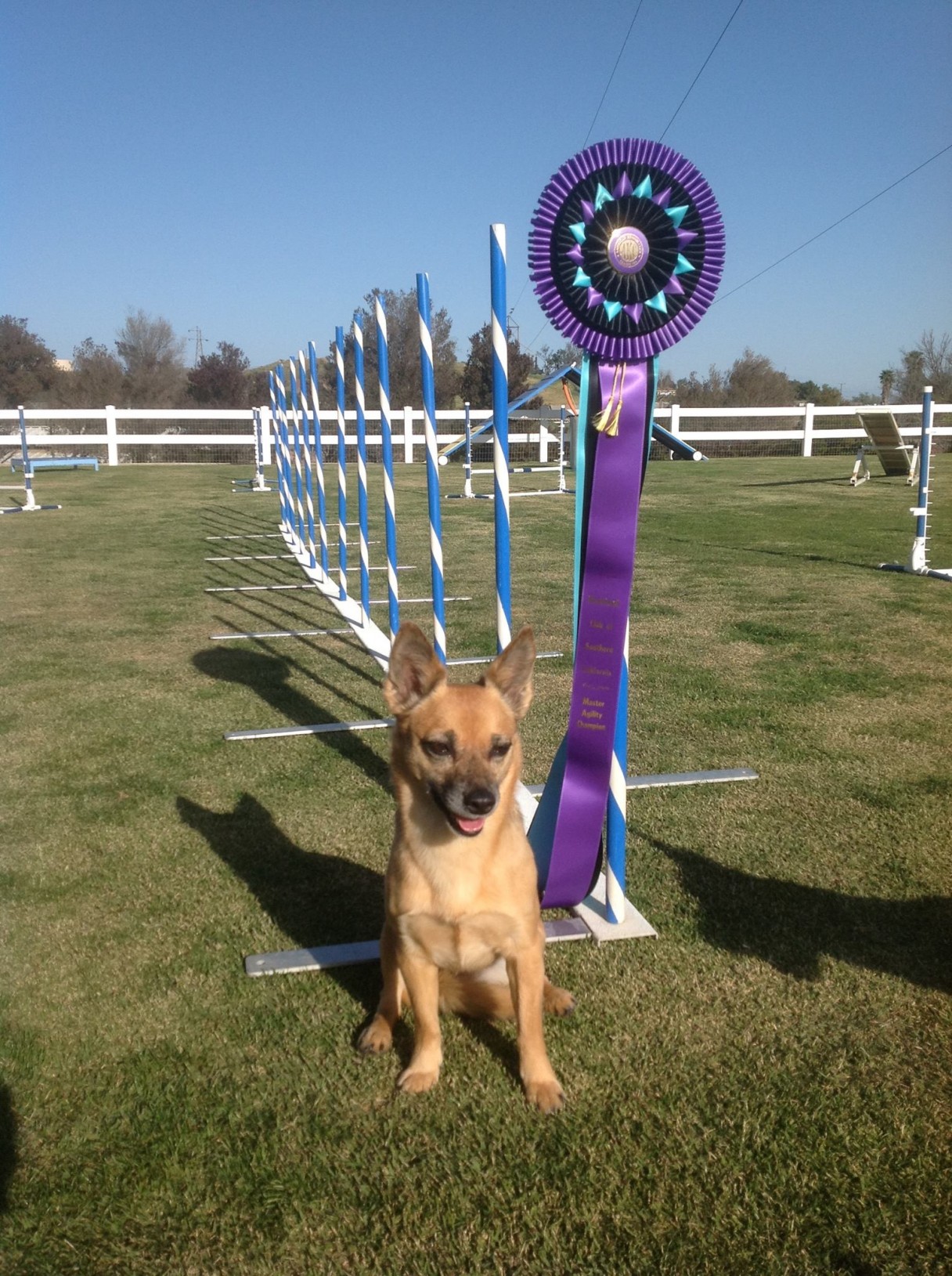 Nicole Carazo of Riverside, CA, wrote this compelling story of a little shelter dog that she rescued with no intention of keeping. The dog had so many issues that no one would adopt her so Nicole started training her and realized that she had something really special. Today, that dog is MACH2 She’s a Keeper – also known as Kassie – and a two-time honoree of the AKC Master Agility Championship. Kassie competes in AKC Agility through the AKC Canine Partners program for all dogs, including mixed-breeds and rescues.

In July, 2010, a 4-month-old Chihuahua cross found herself locked in a cement and steel kennel with four other small dogs she did not know or necessarily like.  She came with no history and no name.

On the wall above her kennel was a large, noisy motor that would kick on with a whine and a “thunk” several times a day. It ran the misters that supposedly cooled the kennels in her wing of the shelter.  The noise scared her and every time she heard the warning hum of its start, she would dive under the bed in the corner of the kennel, terrified.

While trolling the shelter pictures of adoptable dogs one evening, this little girl caught my eye.  I called about her the next morning.  She had been there for several weeks, with no interest, and her time was almost up. I drove out to visit her.  She was not friendly, racing by me in the visiting yard, looking for a way out.  But there was something about her…..She went home with me a week later, after her shots and spay.

I named her Kassie.  I had no plans to keep her but, rather, to foster and find her a loving home.  But Kassie had issues.  She was sound sensitive and would startle and run/hide at unfamiliar or loud noises.  She would bark, growl, snap at my husband, Stephen, when he came in the door from work.  Thankfully, she settled right in with my Australian Cattledog pack.

Kassie failed her first “Puppy Home Manners” class.  She was fear aggressive with the other puppies and the people in the class.  She shied from any unfamiliar noises.  But she was bonding with me and I was falling in love.  I knew we could make this work.

Very often, in rescue, the cute and friendly puppies and dogs find wonderful, loving homes quickly.  The puppies and dogs with “issues” are loved by the foster parents and end up staying.  Such was the case with Kassie.

To help build her self-confidence, I started training her in agility.  All of our cattle dogs are agility dogs.  We took her to trials with us, to socialize her.  My very patient husband finally won her over.  She loved me and became my little shadow.  Her training was slow; I went through two knee replacements but got her back to class as quickly as I was able.  Kassie did well in agility and learned to love the game.  She needed five double Q’s for her first MACH when I had to go in for foot surgery.  It was up to my husband to run Kassie and qualify her for her Master Agility Championship.

Kassie got her 20th double Q on March 7, 2015, at the Keeshond Club of S. California in San Marcos, CA.  I cheered from the sidelines, my foot in a cast, as she and my husband took their victory lap.  I was so proud of them both and so pleased!  My little pound puppy was a MACH dog!!!  She had proven that patience and love and training could work miracles!

I am pleased to say that Kassie continues to do well with my husband running her (as long as she can see mom from the start line!)  and recently earned her MACH 2.  I am out of my cast and learning to walk again and hoping to be back running my little girl soon.

Life is a gift.  Life shared with a dog is a blessing.