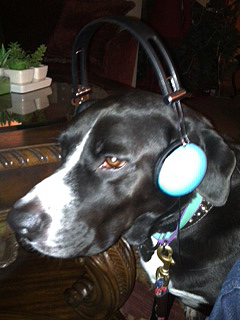 Michael saved Beowolfe from an animal shelter just three days before he was scheduled to be put to sleep.

“But I can honestly say Beowolfe has saved my life a thousand times and given me a new lease on life,” he said.

“I was able to teach him 1,000 commands in less than one year,“ Michael said.

Then Michael discovered the Gem City Dog Club in Dayton, OH, and learned about dog competitions. He joined the club in 2010 and in the past five years Beowolfe has earned more than 25 titles, including the AKC Obedience titles of Beginner Novice and Companion Dog and all AKC Rally titles, including two Rally Advanced Excellent titles – the highest honor in AKC Rally. The team has also qualified for the past two AKC Rally National Championships and hopes to qualify for the 2016 RNC.

“Beowolfe and I love to challenge ourselves,” Michael said.

Beowolfe competes in AKC Obedience and AKC Rally through the AKC Canine Partners program for all dogs,including mixed-breeds and rescues.