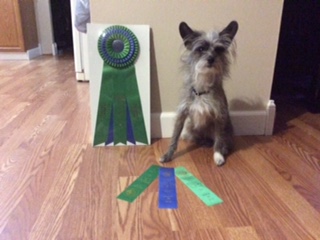 I adopted Sissy when about 7 weeks old. She has been such a joy to have in my life. We have learned so much together during this obedience journey.

Sissy always gives me her all in the obedience ring and that is why we keep continuing .Sissy received her UDX Title at the Golden Retriever Club of America all-breed obedience trial on June 18 with a third place in the Utility B class.

She also got to be in a movie which just came out, starring Alicia Silverstone, called “Who Gets the Dog?” It was filmed in Chicago in January. It was Sissy’s obedience training that earned her the part, and even though it was a small part, it was an experience that will never be forgotten.

Sissy is a member of the AKC Canine Partners program for all dogs, including mixed-breeds and rescues.