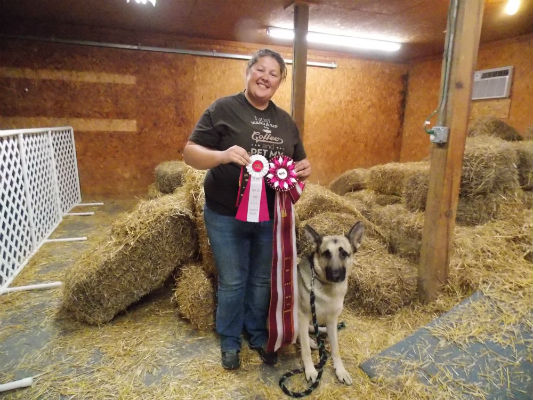 Eight-year-old Rex was once a stud dog at a kennel that was shut down by the authorities.

“I stumbled across his photo online and fell in love with him so I reached out to the organization to arrange meeting him but there was a delay as he was held up in court litigation,” Jeanette said. “After several weeks of waiting, I was finally able to bring him home.”

Rex was in very poor condition and emaciated.

“The rescue group explained that after de-worming him, he just ended up bones.  I had only had him a short while when I noticed his back left joint appeared much larger than the right so off to the vet we went.  X-rays showed he had a fracture in that joint that never got medical attention and healed incorrectly.”

Jeanette’s other dogs love competing in several dog sports and she hoped that Rex could get involved too.

Though not able to participate in many performance sports due to his injury, Jeanette discovered that Rex enjoyed and was able to be successful at Barn Hunt.  The sport, sanctioned by the Barn Hunt Association (BHA), rewards dog for their natural prey drive and a job that many breeds once performed (and still perform today): clearing barns of vermin.

In BHA events, rats are safely enclosed in heavy PVC tubes, and dogs are judged on how well they find the tubes with the live rats, which are hidden in hay bales.

Rex earned the BHA Championship Excellent (RATCHX) in November 2015 and is currently just a couple of qualifying runs from earning the RATCHX2.

The AKC recognizes the titles of the BHA.

“Though unable to make the turns in Coursing Ability Tests, he is able to run the straight line of Fast CATs and is quickly approaching his DCAT title.  He is not super fast but loves participating with the rest of his house mates,” Jeanette said.