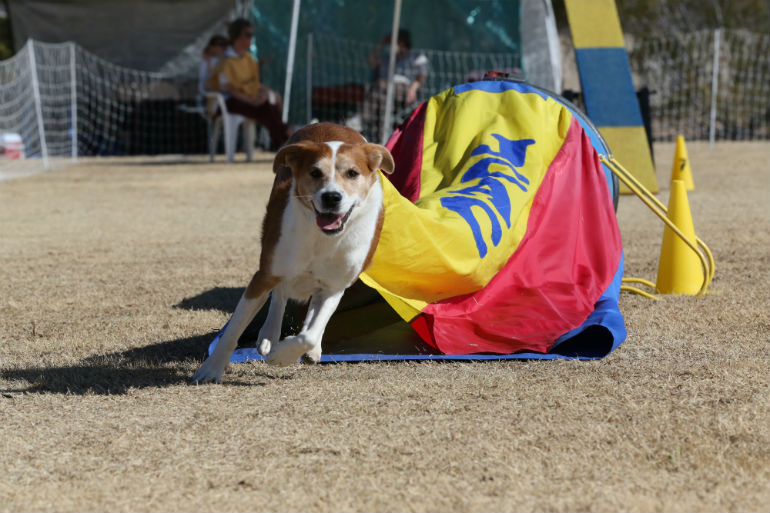 PACH Cross Fire Copper Cricket, owned by Lydia Sharp of Gilbert, AZ, recently earned one of the highest honors in AKC Agility – the Preferred Agility Championship (PACH). But as a puppy, Cricket lived wild in the Arizona desert, just getting close enough to the Sharps’ business to grab an occasional bite of food that they put out for her. Today, Cricket is a happy Sharp family member and loves agility, which helped her overcome her severe fears. Lydia tells their story:

Cricket is our little desert dog with a big heart and even bigger personality. In 2007, my husband told me he saw the pretty little red and white dog wandering around the Arizona desert near our welding business just before Thanksgiving.

She was so skinny and obviously had a litter of puppies somewhere. He set food out for her every day and she would race through the parking lot and grab a mouthful on the fly. Eventually she spent more and more time around the outskirts of the business and less time on the desert. We believe her puppies died since we looked numerous times and could not find any signs of them.

On Dec. 21, 2007, the business would be closed for four days for the holidays. We were concerned because no one would be around to put food out for Cricket. She eventually wandered just close enough to my husband that he was able to grab her and put her in his truck.

When he got home, he let her out in the garage. We stood there looking at her while I was trying to decide what to do with this poor little creature over the holidays. I had my own dogs to protect. Was Cricket sick, diseased, aggressive? Nothing was known, and the vet was closed until the 26th.

Poor Cricket sat there looking at us, terrified but so exhausted that she fell asleep sitting up. I finally decided to keep her in the laundry room and let her use my dog run area until she could get vet checked. My dogs would still be able to use the rest of the house and yard. I put food and water in the laundry room and would sit quietly on the floor while she ate. Soon she was choosing to lie near me instead of squishing herself in the furthest corner from me.

It was the most amazing feeling the first time she laid her head on my arm and slept soundly. She finally trusted me. I took her to the vet and she got a clean bill of health. She was estimated to be 10 months old.

Slowly her larger than life personality started to blossom. She is very vocal and has numerous sounds in her vocabulary. She runs to greet you at the door, yipping and yi-yi-ing, and winding around your legs as if she has not seen you in years. It’s an awesome way to be greeted every day.

She plays her version of hide and seek with every dog she meets. She hides, waits for them to see her, and then chases them around the yard in a tag like game. Then she hides again and it starts all over. The smallest dog in the household, Cricket is also my alpha dog – she runs a tight ship but is fair in her rule.

Cricket was making good progress assimilating to the family but she was still extremely fearful of just about everything. Normal noises and motions would send her racing out of the room. If you threw a toy, she would run the opposite way. People were always the scariest thing, and she would try to hide or make herself as small as possible whenever someone new was around. It was a very sad way to live.

I trained and competed in agility with my Labrador Retrievers so I decided that I would try to teach Cricket the agility teeter since it had both motion and noise. I had seen lots of dogs go from fearful to empowered by learning the teeter. I felt confident that if she could conquer her fears on that, she could do anything. I went very slowly building her confidence every day. Soon she could do the entire teeter by herself and often chose to do it without me asking. I started teaching her other equipment and eventually enrolled her in agility classes for more socialization with dog savvy people.

It was never my intention to compete with Cricket but each day she became more confident and really seemed to love agility. In 2010, I finally decided to enter her in an agility trial and, to my amazement, she started qualifying.

Each one of those letters represents a journey of incredible accomplishment for this little desert dog.