Rescued from Death on the Roads, Clyde Becomes Agility Champion 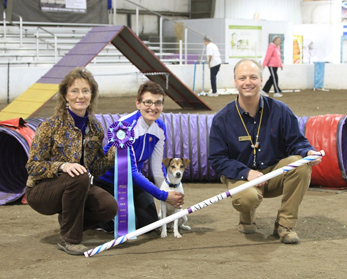 Mary Ann first spotted Clyde running in the middle of a busy street on her way to work.

“Every rib was showing. I pulled over and called to him, and he wouldn't come.  Called again, and he jumped into my arms,” Mary Ann said.

She took Clyde to her veterinarian, who told her to call the police.

“He was taken away in the back of a patrol car. When I found out he was being taken to a ‘kill shelter,' I beat him there and asked to adopt him,” she said.

After Clyde recuperated and gained weight, he started making some mischief around the house so Mary Ann started taking him to training classes.

“We began agility to keep him from becoming a juvenile delinquent, and it has been a wonderful journey.”

It has also been a successful journey as Clyde has accomplished the highest honor in AKC Agility – the Master Agility Championship (MACH).

Clyde competes in AKC Agility through the AKC Canine Partners program for all dogs, including mixed-breeds and rescues. For more information, look here.