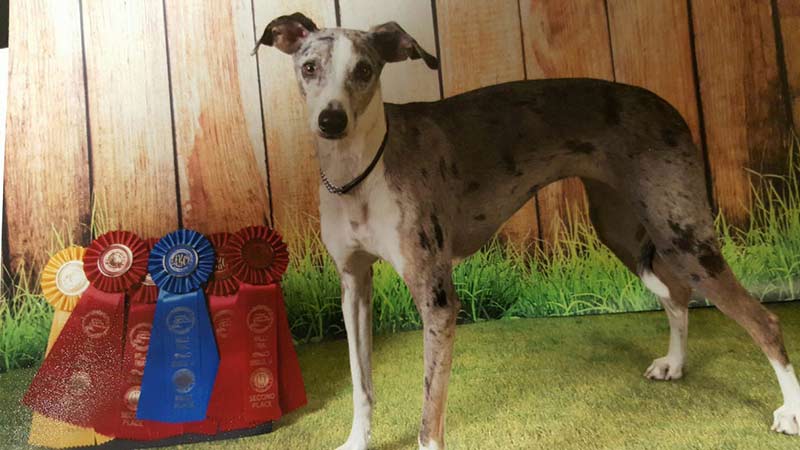 Katie came to me as a foster from Whippet Rescue. After spending time with her, I realized how sweet she was and decided to keep her.

Her mother, a Whippet, was picked up on the street as a pregnant stray, and Katie was born a few days later in the hands of Whippet Rescue in Louisiana. She is a Whippet – Catahoula mix.

At 10 weeks, she would cry in the crate while watching me train my other dogs. When she was old enough, I took her out at class one night, and her obedience potential shined through!  I had never competed in formal obedience, but my trainer, seeing that potential, urged me to work with her and consider performance venues.

I continued to train her and, when we thought we were ready, we entered the trials at the Houston World Series of Dog Shows in Houston, TX. She got her first title at that show in July 2011 at only 11 months old!!

She has continued to amaze me with her training. She now has the AKC Obedience titles of Beginner Novice and Companion Dog, AKC Coursing Ability Advanced title and the Barn Hunt title of Rat Master.

She completed the highest honor in AKC Rally – the Rally Advanced Excellent (RAE) title — at Louisiana Capital City Obedience Club trials in May 2015 with a 1st place, six 2nd places and one 3rd place.

We are currently training for CDX  and hope to enter the Open Obedience ring soon. This mixed-breed dog has opened a whole new world for me in the performance arena, and we are a team!