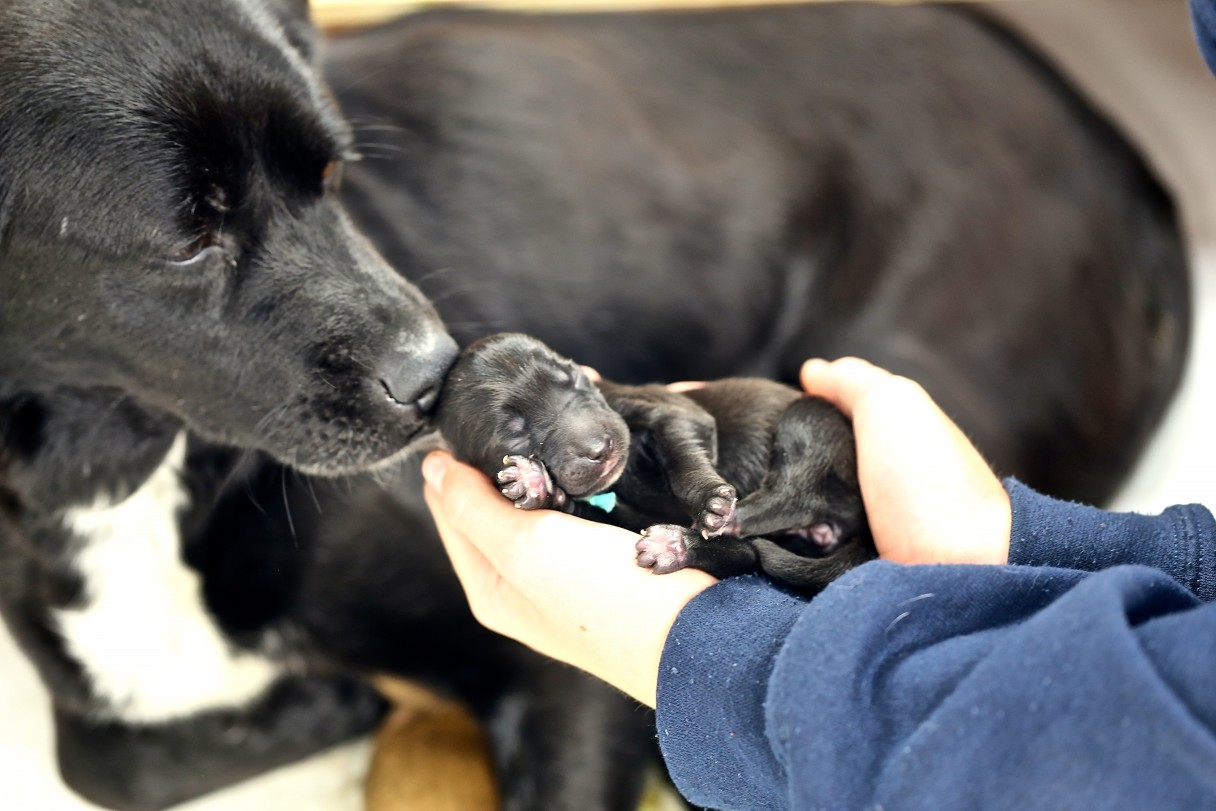 Alaska wags her tail and wiggles her body every time a person approaches.

She has a great grin and calm demeanor but, turned in as a stray to a small rural shelter, her adoption chances were slim.

She was an adult. She was black (the least adoptable color).

But the biggest strike against the Lab-mix was her obvious impending litter.

Most pregnant females who land in shelters don’t make it, due to the limited resources to whelp the litter and raise and house the puppies.

But the odds changed for Alaska. Nearly 600 miles from the shelter that housed her, someone was looking for a dog just like Alaska.

Teena Patel, founder of Doglando Foundation in Orlando, FL, seeks homeless pregnant dogs for a program called Puppy Breath. A friend of Patel’s runs a rescue in North Carolina and found Alaska just in time to pull her out of the shelter that had a 97-percent euthanasia rate.

“I flew up to get her and I first met her at the airport. Someone was holding her leash, and I really stared at her as I approached her to see her reaction, and as soon as she saw me, she just started wagging her tail and she got more excited to see me the closer I got,” Patel said. “She was incredible.”

The Puppy Breath program rescues pregnant females and provides them with prenatal care. The staff then sees the mothers through the birth of the puppies; socializes and trains the puppies; and finds great homes for the entire family. Adoptive owners must attend classes before they get the puppy and after taking the pup home.

Patel’s goal goes far beyond saving the lives of homeless dogs and puppies; she studies the impact of a mother’s temperament on her litter and early socialization and training of puppies.

A certified dog trainer and canine behavior specialist, Patel operates a dog training and daycare center, Doglando U, in addition to the non-profit foundation.

Her trainers reported more incidents of puppies coming to class with poor social skills and being fearful and reactive. “We were always discussing the causes of this – if it was genetic or environmental or both – and if this could be turned around very early in the puppy’s life.”

About four years ago, a rescue group contacted Patel about fostering a pregnant female. “They were bursting at the seams and had no room for her. They did not think we would take her since she was expecting, but I told them that this was an opportunity to see this process for ourselves.” Four days after arriving at Doglando, the mother delivered four puppies, and Puppy Breath was born.

By raising litters and studying every step of the process, Patel hopes to get answers to:

Can we prevent some of the typical puppy “problems” through the start of early training and socialization; if so what behaviors specifically?
How important is sociability in a bitch and will that increase sociability in her puppies?
Would people prefer to have older puppies that are already potty trained and have a foundation in basic skills, over younger puppies that have no training at all?

The mother’s temperament is of the utmost importance. The second mother dog in Patel’s program was reactive to humans and would not let people near her puppies. “You could see the puppies begin to act just like mother: tensing up and growling when people came in the room,” Patel said.

Patel works exclusively with two private rescue groups and her county’s shelter on finding mothers-to-be with the right stuff for her project.

Upon arrival at Doglando, the females are started on a nutritious diet and, since many arrive near their due date, they are introduced quickly to the “den” where they will deliver.

“The den and whelping box set-up includes a camera system that allows us to record and monitor mom from our phones so that if she goes into early labor we can respond immediately,” Patel said. Once the babies’ eyes and ears have opened, the staff begins molding the puppies’ into ideal family companions.

“The program is very unique in that all of the ‘training’ is based on relationship-building through activities that stimulate play and interaction between puppies; between puppies and mom; and between mom, puppies and volunteers.”

The majority puppies are placed in homes in the Orlando area at around 16 weeks. Once approved, adopters can start visiting the litter at age 5 weeks. “Adopters are required to attend the training classes offered by us so that we can ensure they know how to communicate with the dogs.”

What would happen to the mothers after the puppies were adopted concerned Patel when she started the program. But it turned out that the moms are as popular as their offspring. “We have had a waiting list for every single mom, which shows you what great temperaments they have.”

Alaska was no exception. After raising her 10 puppies, all named after locations in Alaska, she found her new home with Doglando Board Chairman Ann Kerschner.

“As a volunteer who spent many hours carrying for her and her pups, Alaska and I developed an extremely strong bond,” Kerschner said. “Alaska is one of the sweetest and most personable dogs I have ever met. She certainly raised the bar to a very high level when we chose our next mommas as we would continually say, ‘Well, if she is like Alaska ….all is good’.”

Alaska’s puppies have gotten the same high marks from their new owners.

Vanessa Gilles had ruled out having another dog after a bad experience involving her family’s first dog biting her two young children. Then someone told her about Doglando.

“I gave them a call and sure enough they were about to receive Alaska…When her pups went up for adoption, we went and my kids had an immediate connection with Kenai. I was completely in shock since my son was terrified with the previous experiences that he had with dogs.”

Even though they live an hour and a half away, the Gilles traveled to Doglando weekly for two months to take the required training classes.

“We had our son take over in training since we wanted him to learn how to deal with Kenai; training has helped every step of the way. Having a well-trained pup like Kenai, my kids never felt fearful and forgot about their previous experiences.”

Today, Kenai weighs more than 60 pounds and is a cherished member of the Gilles’ family.

“The Doglando team made our family’s dream come true, and we love every part of it.”

For more information on the Doglando Foundation and Puppy Breath: http://doglandofoundation.org/

Did you know that rescue dogs and mixed-breed dogs are eligible to join the American Kennel Club through the Canine Partners program? Owners receive many benefits including a year’s subscription to AKC Family Dog magazine! For information on joining the AKC Canine Partners community: /dog-owners/canine-partners/