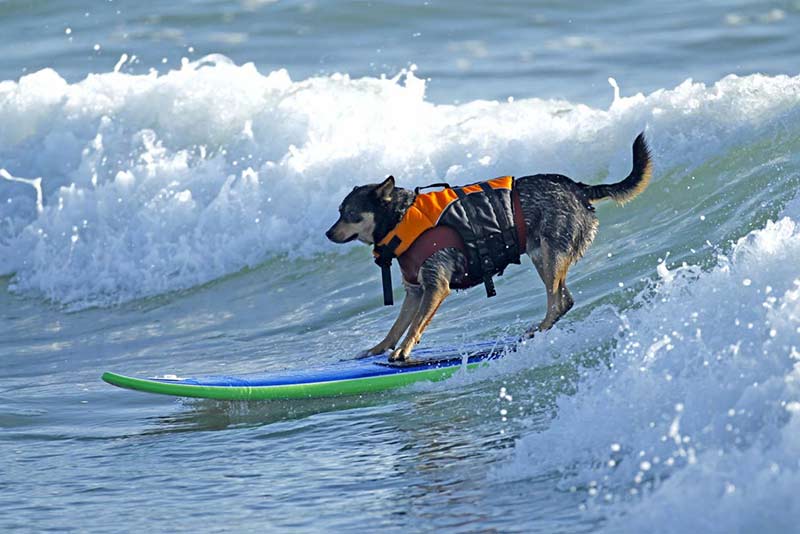 Southern Californian Michael Uy lives for the outdoors and luckily his canine companion keeps up with him.

Abbie holds her own with Uy whether jogging, mountain biking, hiking or even paragliding.

One of their favorite stops is the local dog beach where they both like to swim in the ocean. During one visit, he heard some beach-goers talking about an upcoming dog surfing contest.

“I figured ‘why not?’ and had her jump up on someone's board to see if she'd stay. Surprisingly, she did, and so we pushed it into the beach, and she rode it in,” Uy said. “I was pretty stoked.”

Not only did Abbie stay on the board, she loved riding the waves and was ready to climb back on the board for more.

“I had never even heard of dog surfing and wasn't aware that such a crazy sport existed. Of course, at the time, it was just a novelty event used by pet friendly organizations to bring people together to raise money.”

But Uy and Abbie were about to change that. Abbie loved surfing so much that Uy worked hard to hone her wave-riding skills and encouraged other dog owners to do the same.

“We decided to focus on this as a real sport and drive the athletic aspect to help make competitions more exciting and fun. Our most important focus was on dog surfing as a unique sport that strengthened the bond a dog has with her owner in a very powerful way.”

Today, 8-year-old Abbie has won dozens of medals in dog surfing competitions and even achieved the Guiness Book of World Records for the longest ride by a dog on a surf board. She rode a wave for 65 yards on Sept. 25, 2011, at the Surf City Surf Dog competition in Huntington Beach, CA, to set the record.

It’s not every day that people see dogs riding surf boards – and the feat has put Abbie and Uy in the spotlight more than once.

“Oh wow,” Uy responds when asked about the media attention.

“Since we started dog surfing, we've been on every network, major and minor, even ESPN, Nightline, CBS, Fox. We had a blast doing a radio interview in Australia, and a variety show via Internet in New Zealand.

“Wherever we go, we try to talk about the value of bonding with your dog through sports, and the importance of trust, not training, in keeping that bond healthy.”

Abbie is not just an extreme sport kind of girl. She also has earned the AKC Canine Good Citizen award and is registered with the AKC Canine Partners program.

Her trainability earned her a role as an extra in the 2010 movie Marmaduke, and she and Uy were featured in a reality game show pilot, Dog Park Superstars, which aired on the Game Show Network. The team also appeared in a series of tourism commercials for the City of San Diego, as well as advertisements for Microsoft, Yahoo, and, most recently, Samsung.

“We've been fortunate to meet some great animal lovers in the entertainment industry, and Abbie has gotten to try a lot of different things. All I want is to give her an interesting life.”

Surprisingly, Uy had never owned or trained a dog before Abbie. He was not even convinced he wanted to become a dog owner on the day he walked into Humane Society Silicon Valley.

“She was the only one in the shelter that didn't bark or go crazy when I walked into the paddocks. Instead, she just cocked her head to one side and looked me up and down, and then walked to the door of her cage and sat down, as if to say, ‘Ok, I'll go with you.’ I was about 50-50 on getting a dog, but after seeing her, I was convinced.”

Abbie was 8 months old when Uy adopted her, and she has certainly had more action in the ensuing seven and a half years than most dogs.

Abbie and Uy go jogging twice a day for five to 10 miles. The two enjoy paddleboarding and compete in races along the California coast. Abbie is up for any adventure and willing to try anything that Uy proposes. About the only thing she did not like was snowboarding.

“It's not as easy to control the sled as the surfboard,” Uy said.

Surfing remains her favorite activity and claim to fame.

“She's very comfortable out there and has had some epic rides,” Uy said. “A few pro surfers have become wonderful fans of Abbie…If dogs can ride, then all is right with the world.”

Abbie recently was the first dog of three to be inducted into the Huntington Beach Surfing Walking of Fame. “Feet in concrete and everything!,” he said. “She is now the longest competing and most awarded surf dog. I can't believe it.”

If you would like to try surfing with your dog, Uy said it is imperative that the dog likes to swim in the ocean.

“I don't think anyone should ‘train’ a dog to surf. We've seen many terrified dogs hanging on for dear life at contests. My opinion is that dogs should be given the opportunity to surf if they enjoy getting out in the ocean. It's about trust, not training.”

Uy introduces the surf board the dog in a method he terms “the scoop.”

“Start swimming in the ocean with your dog. If you can't swim, then this isn't the sport for you. If your dog likes playing in open surf with you, then introduce the board. While the dog is swimming, put the board in front of her, then get behind the dog and plunge the back end underwater while pulling it into your waist, so you ‘scoop up’ her front paws. Once her paws touch, she'll naturally walk up it like a ramp and rest. This method makes the board a pleasing place to stay.

“After a few times, you gradually work up to larger and larger waves. But I recommend you start small. Always remember that you should be able to rescue within a few seconds if she wipes out. That'll keep you in safe waters until you gain more experience.”

One of the best things about discovering Abbie’s natural surfing talent is the chance it has given them to educate and help others.

In interviews, Uy always stresses the benefits of exercising and spending time with your dogs. Abbie does her part to help homeless animals. Every year, she is a guest of honor at the annual fund-raiser from the shelter from which she was adopted – Humane Society Silicon Valley.

“We bring her dog surf board, and the kids take pictures. It's a party.”

As for the future, they are not slowing down. “Next month we're going to Hawaii. She'll be the first dog to surf NorCal, SoCal, the East Coast, and now Hawaii! Stay tuned!”

You can learn more about dog surfing and keep up with Abbie’s adventures at her Facebook page: http://www.facebook.com/pages/AbbieSurfs/95529293505

You can see the video about Abbie that Uy produced for the Huntington Beach Surfing Hall of Fame here: