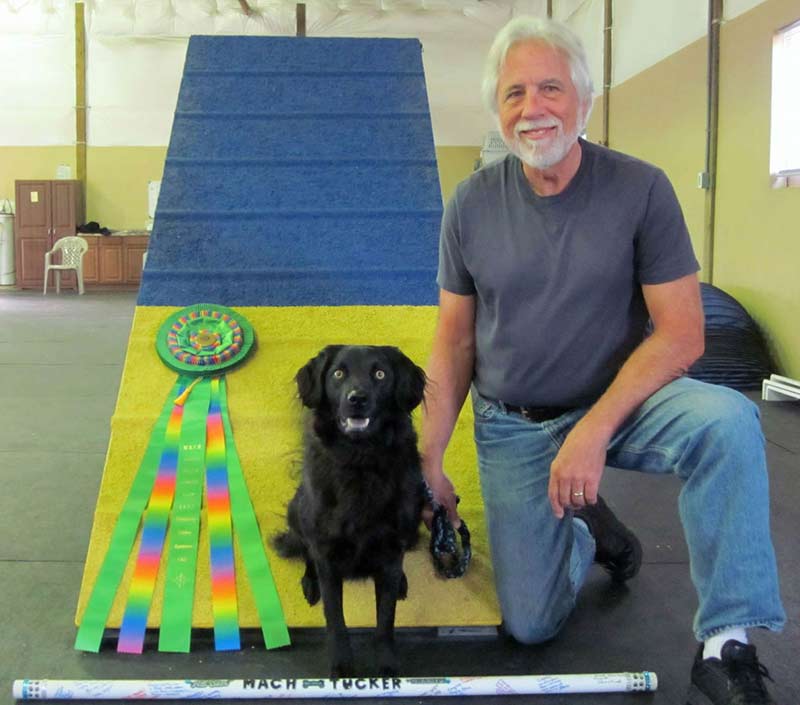 “But Tucker chose us that day.  Thankfully he did,” Denise said.

They started training Tucker right away, first in puppy classes and then basic obedience classes. He passed the AKC Canine Good Citizen test and enjoyed all the training, but his true love turned out to be agility.

“Obedience type classes were just too boring for Tucker and probably for the handler (his Dad) too,” Denise said. “Our goal was to get a MACH title by the time Tucker was 3, but medical issues with the Dad part of the team pushed the time line out almost two years.”

After the medical issues were resolved, there was another setback when Tucker and Scott collided on course three months before the March 2015 AKC Agility National Championship (NAC). Scott had a fractured and badly sprained ankle, and Tucker had two dislocated ribs.

“With great naturopathic therapy, they did make it to Nationals, but weren’t quite back to form.”

Tucker finished the highest title in AKC Agility – the Master Agility Championship (MACH) – on Aug. 29, 2015, and qualified for the 2016 NAC.  Besides agility, Tucker also LOVES to fetch balls.

Tucker is a member of the AKC Canine Partners program for all dogs, including mixed-breeds and rescues.