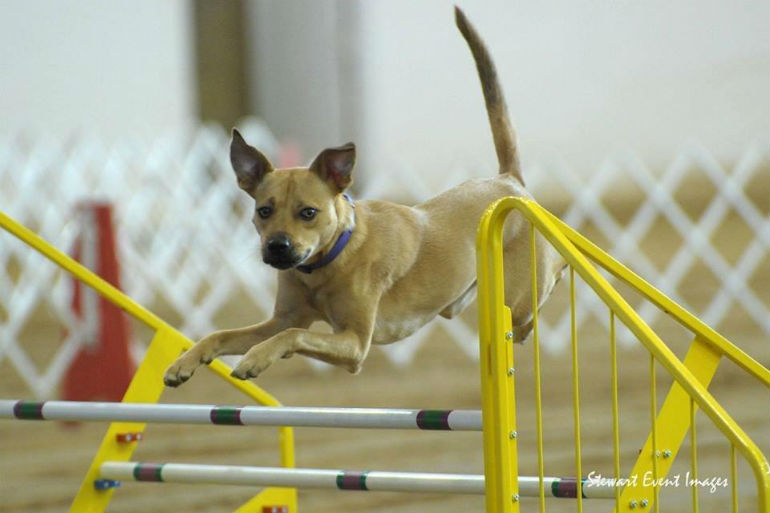 Dogs have always found me in the past. A few years ago, I lost two senior dogs within 6 months of each other, and my husband took a job that was going to put him on the road. I knew I’d go crazy being in the house by myself so I decided it was time for me to go find a puppy.

Shelby was found in a dumpster when she was 3 weeks old.  We adopted her when she was 7 weeks old.  I  had dogs all my life and never had any help training them, and they all turned out just fine.  But I realized very quickly that I had my hands full with this puppy.  She wouldn’t crate train. I guess being stuck in a cage at the shelter for more than half her life was enough for her.  Every time I crated her she soiled the crate and absolutely screamed.  Ultimately I confined her in the kitchen, and she did much better.

Friends came by to meet the new puppy, and she would snap at them; she was such a scared puppy.   I knew we both needed help so I signed up for a puppy class at Southern Tails in Asheboro, NC.  We were both learning so much, and she was doing well so we just kept going to classes…Obedience 101, 102 and 103.  As time went on and she got more mature, I watched her run around the yard like a crazy lady. She would jump the small shrubs, and I got the idea that she might be good at agility.  I didn’t know anything about it but did some research and learned that she couldn’t start until she was at least a year when her body was fully mature.  So we continued with other classes; we even did an acting class!

Even with all of the classes and exposure to other dogs, she was still very reactive to dogs; she got over the people fear.  Finally she was old enough to start agility. I found Lynn Brodie of Creekside Canines, and we started with her right away.  Lynn was concerned about Shelby and her reactivity so she did a control unleashed-type  class for two other students and Shelby.  That really helped teach me how to redirect her focus to me and not to the other dogs.  It has taken a lot of time and patience, but she is really good now. I still have to keep an eye on her, but I can read her body language when she is getting ready to be snarky and I can head it off.

I believe the combination of my learning how to redirect her focus and doing agility has given her so much confidence that she is a much less fearful dog.

We started learning agility in October 2013, and we did our first trial in August 2014.  Those first few trials were interesting to say the least.  We had typical novice dog stuff, but the thing that got me unglued was one run when we were about half way through and Shelby decided she was finished and left the ring. Knowing her history and her personality,  I thought for sure there was going to be a dog fight, but thank goodness the people working the gate were paying attention and stopped her before she got to any other dogs.  One time we were doing a trial in Chatham, VA, and she had a lovely run and she jumped the last jump and just kept on going and jumped out of the ring.  I panicked but all she did was run to her treats; she could have cared less about the other dogs.  That was when I figured out I needed an ending behavior. So now after any run, she gives me a “high 10” so I can grab her collar and make sure she doesn’t leave on her own!  She is too smart for her own good.

She is currently in AKC Masters for Standard, and we need one more Q in JWW and she will be in Masters in that as well and we can start working our way towards a MACH.  I think we have done pretty well in our short time doing agility.

I am so grateful that I got Shelby and not someone else because I don’t know that she would still be alive if anyone else had gotten her, and she certainly would not be competing with the success she has had.  I had so much time with my husband traveling that she was my pet project (pardon the pun)  so we worked and trained all the time.

I am also extremely grateful to the AKC and AKC Canine Partners for making their events open to mixed breed  dogs like my Shelby.  It was so clear early on that she needed a job, and now she has one that she loves!