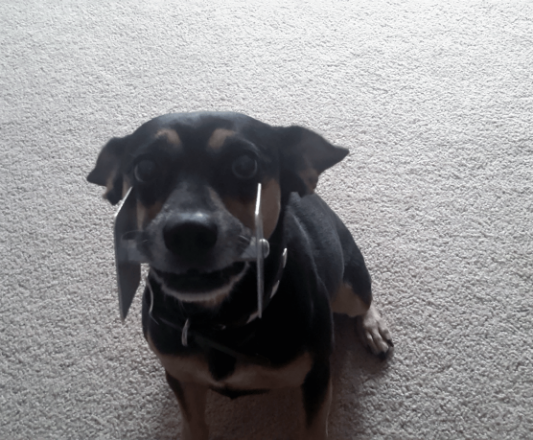 Emmy was surrendered to the local fire station during the mortgage crisis of 2008. She ended up in the shelter where Patricia adopted her along with Jenny, another All-American Dog.

“Both dogs settled right into their new home immediately with Emmy definitely ruling the roost.  She is both affectionate and fiercely independent.  She will cuddle when she chooses but don’t pick her up,” Patricia said.

“We began training in agility and obedience about a year later. Emmy finished her Excellent Preferred titles in AKC Agility and, while she loved the social aspects of the trials, running the courses was optional.  We continued on in obedience. She is the first dog that I have trained, and we have both learned a lot.”

Emmy finished her Utility Dog (UD) title on Aug. 13, 2016, at the Jefferson County Kennel Club trial at Purina Farms in St. Louis, MO. Utility is the most advanced level of AKC Competition Obedience.

Emmy is a member of the AKC Canine Partners program for all dogs, including rescue and mixed-breeds.