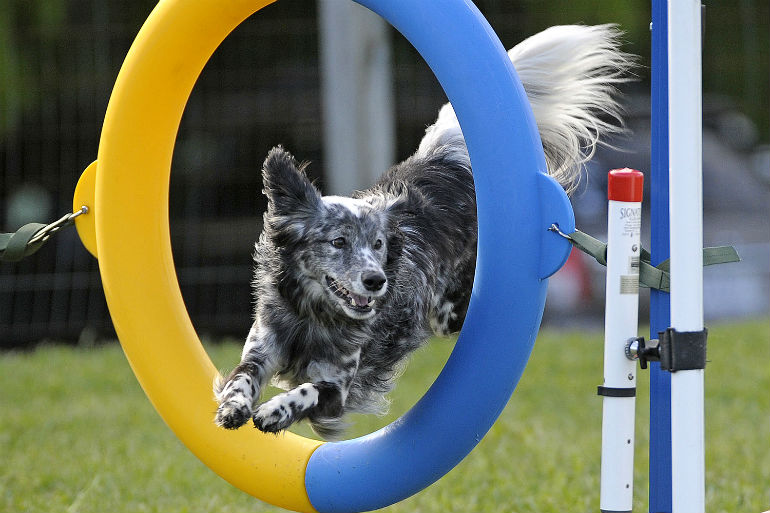 Spotacular Lil Jazz Hands MXP2 MXP MJP4 MJPB CGC, also known as Sammie, is one-half of a great agility team with his owner Sue Thompson of Raleigh,  NC. At 10 years old, Sammie is running better than ever and closing in on the AKC Preferred Agility Championship through the AKC Canine Partners program. Sue tells us more about her awesome agility partner:

“Sammie is a 10-year-old mixed breed we've had since he was 8 weeks old. We spotted him on Petfinder at a small independent rescue in Lexington, NC. He was part of a litter born at the rescue. All the other puppies were marked like Border Collies except Sammie who was almost all white with light blue markings and ticking on his face. Then he got darker and darker, just like a setter. A friend calls him a 'pocket setter.'

At a smidge over 18” and weighing 25 pounds, Sammie competes in the 16” Preferred group in AKC Agility. We started playing AKC in 2012. We hope to earn his PACH within the next year and look forward to playing some of the Premiere classes before he retires.

He is my first agility dog, and holds titles in USDAA, NADAC, as well as earning his championship title, C-ATCH, in CPE agility. He also earned Bad Dog Agility’s Power 10 distinction as the #1 fastest 16P All-American Dog for 2014 in AKC Agility.

When he’s not playing agility, Sammie enjoys hanging out with our Shetland Sheepdog, Miles; taking daily walks; weekend hiking & kayaking; string cheese; and starting to learn the basics of Rally. We love him; he is just a great little guy!”