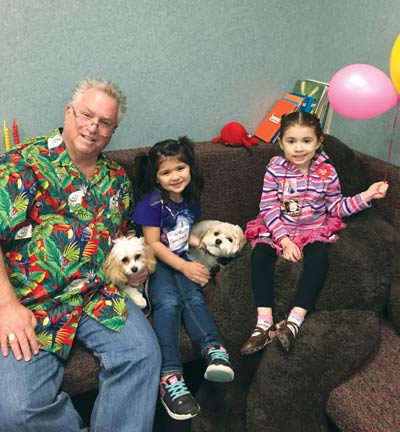 This article appeared in the May issue of the American Dental Association (ADA) News.

At the Golden Pediatric Dentistry & Orthodontics, there's a member of the dental staff that not only has the ability to put an immediate smile on a patient's face, but also has never missed a day of work.

“She's entertaining and is just an absolute joy,” said Dr. Alan Golden. “She is an official member of the practice.”

At the 10,000-square-foot facility in Woodbridge, VA, Flossie is free to run around with one job: Make people comfortable wherever they are. Flossie has been coming to the office since she was 8 weeks old in 2012.

“I would say, 'Back to work,' and she goes out and finds a lap to sit on, or sometimes she cuddles with the kids,” Dr. Golden said. “She's good at it.”

According to the ADA Center for Professional Success, a National Institutes for Health study has found that being in the presence of a companion animal is associated with improvements in mental, social and physiologic health status.

Because of their ability to reduce anxiety and stress, along with comforting people, therapy dogs are used in various health care settings such as hospitals, nursing homes and dental practices. According to the American Kennel Club, significant advances in the field of animal assisted therapy and the use of therapy dogs have been made since the 1980s. Organized therapy dog groups provide educational material to volunteers, they screen both volunteers and dogs, and they provide liability insurance for when the dog and handler are volunteering in a therapy setting.

With the success of Flossie, Dr. Golden said he's been considering creating a resource for dentists who are interested in using therapy dogs in their practice.

Dr. Golden began practicing in 1976. He said he considered acquiring a therapy dog, but because of the small size of his office, he didn't think it was suitable.

“You don't want patients and your dental team tripping over a dog,” he said. “You need space.”

Thirty-six years later, along with a much larger dental office — the main office room alone is about 6,000-square-feet — he sought a therapy dog.

“I just thought, being in a pediatric practice, children would like something to play with,” he said. “Some dentists have fish tanks or birds. Some have their dogs in the practice, but I wanted to do it at the official level.”

Flossie, who turned 3 years old May 5, began her training to become a dental therapy dog at age 6 months old. She received her therapy dog certification from the Alliance of Therapy Dogs.

“She came with me to the office to play,” he said. “She was very well supervised.”

Since then, Flossie has become a permanent presence in the office.

“When new patients make appointments, we let them know that Flossie, our therapy dog, is in the office,” he said.

While most of the people who walk in to his office welcome Flossie's presence, there are, on occasion, children or parents who have a fear of dogs. In addition, there is no dog that is completely hypoallergenic leading some patients to request to avoid Flossie.

On these occasions, Flossie is sent to a small fenced-in area with a doggie bed — the same place where she naps when the dental team members are on their lunch break. She goes to this area on her own when she's tired and wants to rest, Dr. Golden said.

“We never force Flossie on anyone,” Dr. Golden said, noting that he's had zero problems with numerous patients who have dog/cat allergies and asthma, even if they handle her.

Dr. Roger Hennigh, Dr. Golden's partner, was so impressed by Flossie that he adopted Flossie's half-sister Lexa who has just started her own therapy dog training. His patients were disappointed on days Flossie wasn't in the office, Dr. Golden said. Meanwhile, Flossie continues to receive regular training — continuing education for dogs.

“She still barks at the TV,” Dr. Golden said. “I want her to be as well-trained as those super dogs you see on television.”

For those interested in getting a therapy dog, Dr. Golden suggests dentists conduct their own research and very carefully choose the dog they want and need.

In addition, Dr. Golden said, dentists need to have the right attitude and dedication when it comes to therapy dogs.

“You need to be able to trust dogs with kids,” he said. “To achieve this trust, you have to dedicate a lot of time to make sure the dog is well-trained. Flossie has definitely made me a kinder, gentler person.”

For more information on the AKC Canine Partners program for all dogs, including mixed-breeds, look here.