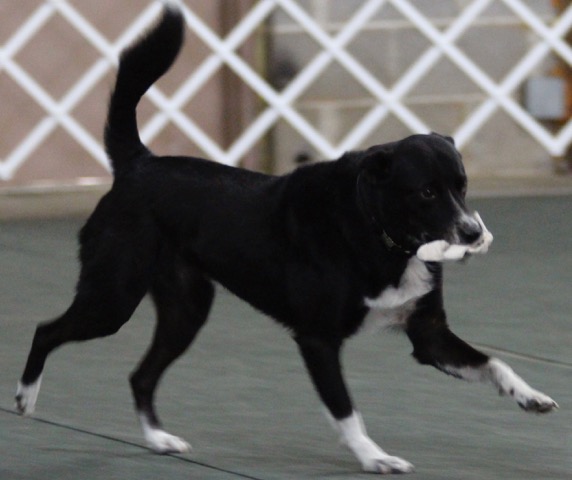 When the judges announced first place in the Utility B class at the Lawrenceville Kennel Club trial this summer, the winner burst into tears. It was a long emotional ride that Georgia resident Susan Moore had with her All-American Dog, Barrett, who was saved from a high kill shelter in 2011. Today, Barrett is a top performing Competition Obedience dog who has earned the advanced level AKC Utility Dog (UD) titles. Susan tells their story:

In December 2011, Barrett was picked up as a stray by animal control when he was about 6 months old. He had been in the high-kill shelter for about two months when a friend shared his photo on my Facebook page. An advocate for the shelter set up a Chip In for him on Paypal to raise enough money to cover his veterinary bills.

When we had raised enough money to cover his care, I went pulled him from the shelter for a rescue group, intending to foster him. After about three months, I realized I couldn’t part with him; I became a “failed foster.”

Barrett had a naturally friendly, willing nature, but he clearly had a lot of “baggage.” We couldn’t know what he had been through in his life. But, over time he learned to trust and began to bond with me. Now, we love each other very much; he follows me everywhere and watches to see what might be next.

Training Barrett was definitely starting from scratch. But once he learned how to learn, his progress was rapid. He earned his AKC Obedience Novice and Open titles each in three  straight shows and earned the honor to enter the AKC Obedience Classic in 2014 and 2015.

Barrett earned his Utility title with a win out of Utility B at the Lawrenceville Kennel Club show in Atlanta, GA, on Aug. 27, 2016.

When the judge called our number for first place, I burst into tears. It has been an emotional journey with my special boy; he has overcome so much. Now he is a happy, confident dog. I couldn’t be more proud!

Barrett has a lot of friends.  I can’t thank them enough for their support and encouragement.