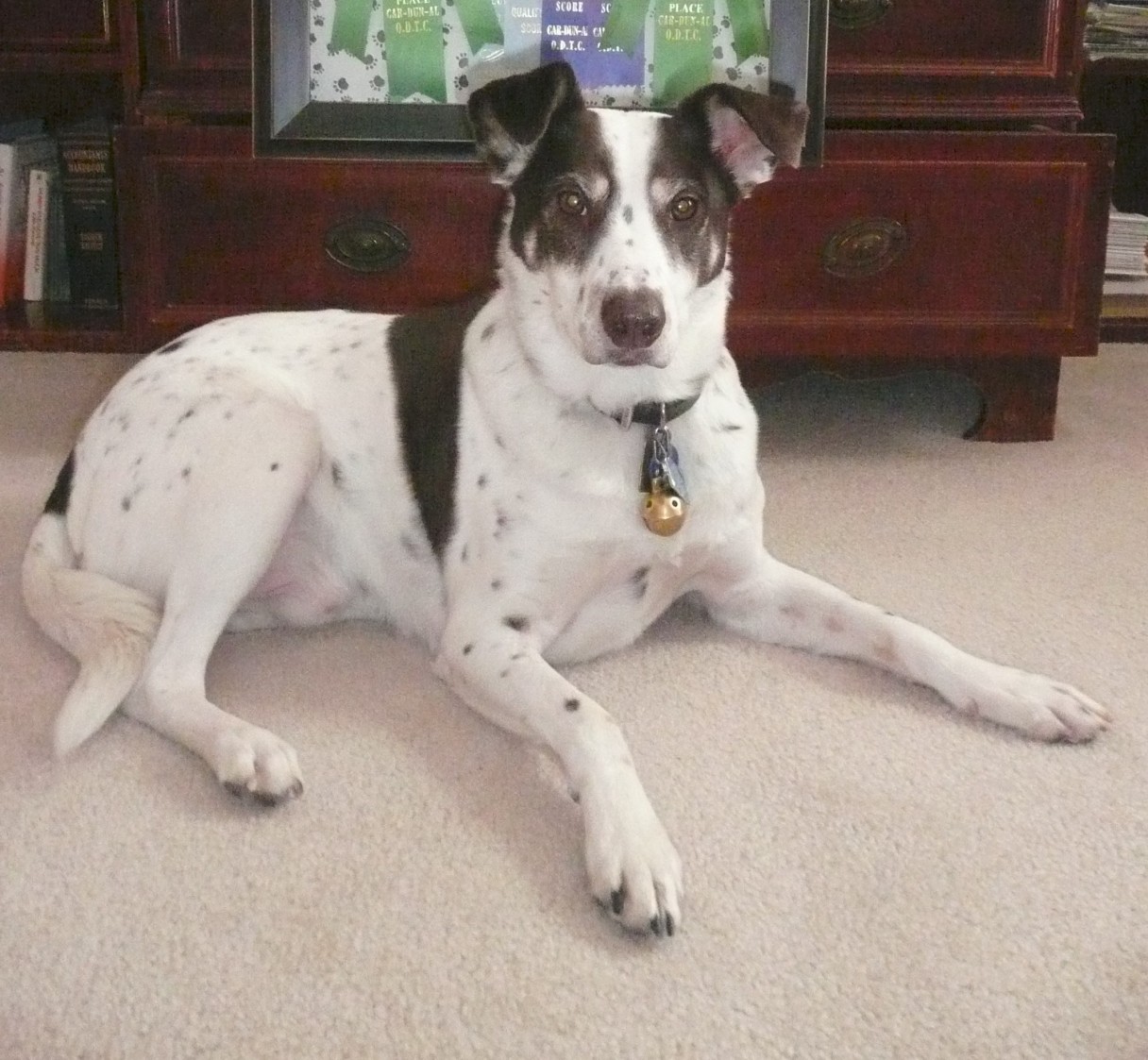 Dogs were never a member of my household. Work and travel were always interfering. That was until February 2004 when Buster J. Brown found me deep in the woods of Mississippi.

Buster was my first dog, ever. Buster had been living in the woods for some time. No collar, no microchip; he was sick, hungry, and dirty. But when he spotted me, he greeted me shyly with a flicker of a tail wag. I was smitten. The day after I was found, we drove the 830 miles back home to Illinois. Through the kind cooperation of an area rescue, Buster was cleaned up and nursed back to good health.

Way back in 2004, I knew nothing of dogs except they were fur covered, had four legs, and occasionally barked. I did know I wanted a good household pet and a well-mannered companion. Almost immediately, I began learning how to train a dog. Buster completed several obedience training classes over the years. I kept training because Buster seemed to enjoy the activity.

My obedience instructor pushed me to get a second dog while I was still working with Buster. I relented. Eddie came to my household in 2012. My only regret was waiting so long to bring a second dog into my life. However, I don’t regret my pick.

One of Eddie’s most important traits is that he is a good dog. Eddie is also an All American dog. Eddie’s mix is difficult to figure. There is hound of some sort in his mix. Beyond that, it’s anyone’s guess.

Today, the second dog in the house is Chloe. She came to the house shortly after Buster died in March 2015. You guessed it; Chloe is an All-American Dog, too. Like Eddie, she came from a local rescue. Chloe definitely has some smooth-coated Collie in her. She has a Collie face, Collie markings, and definitely a Collie bark!

Eddie and Chloe have markedly different personalities. Eddie can be shy when meeting someone new. A greeting with a treat overcomes his shyness. In working with Eddie, he gets bored with incessant repetition. Two repetitions of an exercise and he is ready to move on to something else. More and different exercises with fewer repetitions are the training norm for Eddie. Captain Eddie has earned the AKC Obedience title of Companion Dog and the AKC Rally Novice title, as well as the AKC Canine Good Citizen-Advanced title.

At the other end of the spectrum is Chloe. She is the consummate “social butterfly” who insists on meeting and greeting everyone she sees. If you’ve seen her in the competition ring, you know she isn’t shy about saying hello to judges and stewards, much to my chagrin. If I let her, Chloe would practice an exercise over-and-over in training as long as there is praise and an occasional treat. Even though Chloe has only lived with Thomas for less than a year, she already has earned her AKC Companion Dog title in Obedience and her AKC Canine Good Citizen title. Her formal name is Crimson Chloe CD CGC.

Today I still know very little about dogs. I consider myself lucky to have known three such wonderful All American Dogs as Buster, Eddie, and Chloe. What I’ve learned in my brief time with dogs is that if you think you have them figured out, think again! If a dog does something wrong, it’s the trainer’s fault. Before trying to “fix” your dog, consider “fixing” your training first. In the competition ring, regardless the score and whether we’ve failed to qualify on an exercise, if my dog had fun or made me smile, they “qualified.” Each dog is an individual with a unique personality.