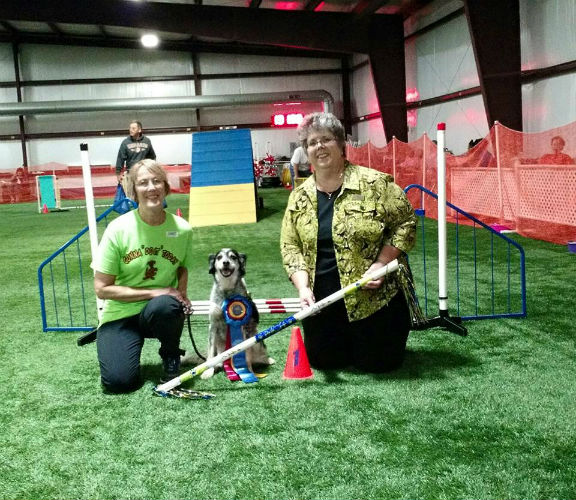 PACH Zucchini of Wylde Green, owned by Trish Nelson & Arron Wings of Iowa City, IA, recently earned one of the highest honors in AKC Agility, the Preferred Agility Championship (PACH). It is hard to believe that ZuZu used to hide in the car when she arrived at class. Trish tells the story of their journey:

Zucchini is 9 years old and was adopted from the Iowa City animal shelter when she was 4 months old along with a sister, Sage, who also does agility.

They were undernourished and afraid of everything. Zucchini and her sister were in need of a lot of socialization so we enrolled them in classes.

ZuZu was so afraid when we went to our first puppy kindergarten lessons, it would take about 10 to 15 minutes to coax her out of the car. In class, she would break free of her leash and run across the room to be with Sage.

At her first agility classes, she would cringe in the back of her crate until we patiently coaxed her out.  It took a while, but we just kept making sure she had positive experiences with everything we asked her to do and gradually, she gained confidence.

She was 6 years old before we entered our first AKC Agility competition. She needed lots of positive encouragement, but she now loves agility and, three years later, is running more and more confidently and faster all the time.

Agility has played a huge role in helping Zucchini be the dog she was meant to be. We couldn’t be prouder of our All American girl!

ZuZu is a member of the AKC Canine Partners program for all dogs, including mixed-breeds and rescues.