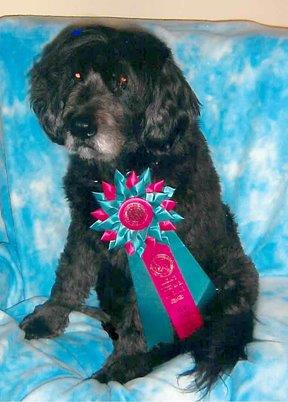 Wabbitt wondered up to Jim and Bobbi while they were working out in their yard. His eyes were so infected that he could not see, and he was running into bushes and trees.

“He was so very thirsty and hungry; we couldn’t believe the shape that he was in,” Bobbi said. “I started cleaning his eyes when he finally stopped drinking and eating. Once his eyes were cleaned out, he felt so much better that he started hopping around just like a rabbit – and so that is how he got his name.”

The veterinarian told them that Wabbitt would have soon gone blind, if they had not rescued him and gotten medical treatment.

After a few months of love and care, his eyes were perfect, and he had gained weight.

Since Jim and Bobbi already competed in AKC Rally with Tater, who is the top All-American Dog title-holder in the sport, they started training Wabbitt in basic obedience and then soon rally.

Today, Wabbitt has obtained the AKC Canine Good Citizen title as well as the AKC Obedience titles of Companion Dog and Beginner Novice.

He finished the top title in AKC Rally – the Rally Advanced Excellent (RAE) title on Feb. 14, 2015, at the Strawberry Dog Show Cluster in Lakeland, FL.

“Wabbitt loves to go to classes, play with Tater, and get treats. He loves everyone, two- or four-legged,” Bobbi said.

For information on joining the AKC Canine Partners community for All Dogs, including mixed-breeds and rescues: /dog-owners/canine-partners/