Once Scared of the World Puppy Now Confidently Competing 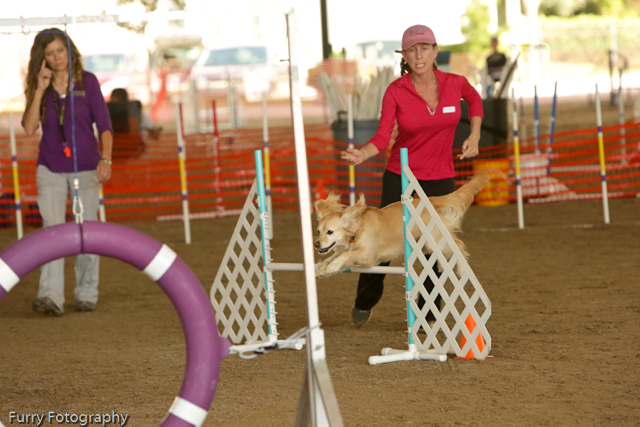 Callahan’s Christmas Bliss had an early life that was anything but merry.  Rescued from a Puerto Rican shelter with 278 other dogs, Bliss barely survived distemper and a bad case of mange.

The spaniel-retriever mix’s first six months of life were spent within the University of Florida’s College of Veterinary Medicine.

Just before Christmas 2010, she was transferred to the SPCA Tampa Bay, in hopes of a forever home. Bliss was a thin, unsocialized, and very shy puppy.

But on Christmas Eve, volunteer dog walker Lori Callahan spotted Bliss and the puppy reminded her of the spaniels with which Lori had spent her childhood. Though she already shared her life with three dogs, one cat and two birds, she took on the challenge and adopted Bliss.

Naming Bliss was easy; not much else was.  She was terrified of the world – only with the cat she did she find comfort. Lori enrolled Bliss in obedience and freestyle classes to work on confidence-building. Bliss went to work each day with Lori and her therapy dog Ian, a Golden Retriever.  Slowly Bliss began to accept people.

To gain more confidence, Bliss was enrolled in agility.  But the class overwhelmed her, and Lori thought she would never graduate level 1.  Then, on the last day of class, Bliss performed on all the equipment with confidence and moved up.

Since then, Bliss continued to improve and today even competes in AKC Agility at the most advanced level of Excellent through the AKC Canine Partners program for all dogs, including mixed-breeds and rescues. The now 5-year-old dog also has earned the AKC Canine Good Citizen award and has received a freestyle title.

Lori says that today this dog “does everything with an air of pure bliss.” Her next endeavor will be Barn Hunt, where she will get to put that spaniel nose to good use!