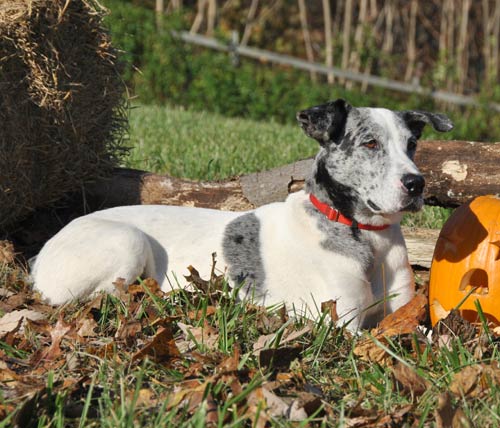 Not every dog is cut out for the demanding role of a therapy dog. Rachel Shaw shared this story about her rescue Catahoula Leopard Dog and her discovery along the training road that Odette preferred not to do therapy work – except for one special moment that she will never forget. This story originally appeared in a 2012 issue of the AKC Canine Partners News.

When I hear the phrase “therapy dogs aren’t trained, they are born,” I get chills down my spine. This statement could not be more true.

I waited so patiently all through college and into my first job before I adopted my very first dog. Odette was a sad Catahoula Leopard dog from a rural shelter. She was around 3 years old and had been living semi-feral her entire life. Having researched the breed and grown up with German Shepherd Dogs, I felt I was experienced enough for the challenge even though she was my first dog. I was so excited to dive into the dog world and quickly joined a local training club and got involved in every type of training they offered. We started obedience and agility training and began preparing for the AKC Canine Good Citizen and Therapy Dog International tests. I wanted to do therapy dog work more than anything! Being a teacher in an inner-city school with a majority of the student population being at-risk youth, I thought this would be the perfect lifestyle for both of us.

Odette passed her CGC and TDI tests with flying colors! I was beaming with delight at how my skittish, feral Catahoula had transformed into a gleaming, outgoing and eager-to-please dog. I could not wait to start therapy visits and watch the magic begin. I waited anxiously for that coveted TDI bandana and identification tag to arrive. When they did, I started emailing other friends with therapy dogs right away to plan visits.

We visited a group of children in an afterschool program. They loved Odette! The wanted to hug her, pet her, lay with her and just touch her at all times. Unfortunately, Odette balked at this idea. She never once stepped out of line, but her body language said it all. Head down, tail down and sometimes tucked, and she kept trying to side step away from the children and stay behind me. The thought of strangers interacting with her in such a personal way was out of the question. She was a polite dog and endured the harassment of strange hands all over her, but I will never forget the way she looked at me.  She put up with the therapy dog visit for me, but not because she genuinely enjoyed it.

Devastated, I immediately consulted with my trainers and other therapy dog handlers. We discussed lots of possibilities of what went wrong. They told me not to worry and that it was probably just first visit nerves. “Odette is such a silly-sweet dog; she’ll warm up to all the attention, “ they said. I was also advised to try adults and older teens instead. Maybe the young children were just too active for her on a first visit. So I did.  I tried the nursing home routine and Odette remained aloof to the residents. She was kind to them, but didn’t eagerly approach them, lick their hands, give them her paw the way the graceful Golden Retriever pair did.

Odette was always looking away, out a door or window; it was like an emotional disconnection. She was there, but she didn’t have that instinct to go to a stranger and be their best friend. I was so upset; I wanted nothing more than to have a therapy dog and share heartwarming stories about our adventures together.  After all the time I invested in training, I didn’t want to give up. But I had a feeling that this just was not the right lifestyle for my dog.

After much debate, once again, I decided to try one more therapy visit. This time it was to a group of adolescent teens, mostly at-risk youth from the city. And of course, Odette really could have cared less about them. She stayed beside me and as the teens extended their hands, Odette gave them half-hearted sniffs and gave me the “look” of course. I gave up that day. As the group leaders were discussing an arts and crafts activity, I moped in the chair as my anti-social, yet well-trained Catahoula reclined across the cool tile next to me. It broke my heart that she couldn’t satisfy the needs of the teens that day. I was so disappointed in my dog. I felt I had failed as a trainer and the goal I had set out to accomplish.

And then a miracle happened. Odette got up, walked across the room and lay under a table at the feet of a young girl. Odette did not nuzzle her hand, did not put her paw on her lap, she hardly even acknowledged her. The girl glanced down, shuffled her feet a bit to give Odette some room, but she did not make any effort to pet Odette or interact with her in any way. Odette made no attempt to move away from the girl, even while we were all doing the activity. Odette stayed at the feet of “Megan” while we all worked. I began to overhear the comments of frustrated kids saying “how come that dog won’t come to me” and “I guess she just really likes Megan.” I didn’t know what to say. I made my typical excuses. “Well Odette does as she wishes, and sometimes she just picks a person to stay around, but it’s usually me!”

As I watched the situation unfold, I never saw Megan pet Odette, but I watched them exchange energy through their eye contact.  Odette never left her side and laid patiently at her feet, only looking up at Megan when she would look down at her. When the visit was over, I watched as Odette stood up and stretched. Megan placed her hand on Odette’s back and let her slide away, never looking back at her.

Still taking in what had happened at the group, I got an email a few days later from the group’s counselor. She said she was in tears writing the email and explained that the girl Odette had chosen that day had lived a very hard life, having suffered abuse in her younger years and numerous violent outbursts in her adolescent years. She had been given up to the state and was in and out of foster and group homes. Gradually giving up on her life and the people trying to help her, she didn’t even have the desire to act out anymore. She had become withdrawn and wouldn’t interact with any of her peers and anytime someone would try and counsel her, she would usually just make the same statement “what does it matter, no one really cares about me anyway” or “it’s just your job to care about me.” The leader explained that after Odette left something inside her changed. She suddenly became the girl that the dog chose. She was special because out of all the people in the room, Odette picked her and no one else. Her peers were jealous at first, but then started calling her “dog whisperer.”

I was in shock at this email. I finally got what I always wanted: my “therapy dog moment” that everyone talked about. That moment when you see your dog has changed someone’s life. It’s a moment that makes you stop and think about all the events that led up to this. All the training, wishing and wondering boiled down to these few minutes in one person’s life. Odette lived a similar life in her past: a wild dog living on the fringes of society, taking from people only what was necessary to survive. She was a survivor and didn’t need any help. Odette has taught (and still continues to teach) me many important life lessons about dogs, training and their natural behavior. She has taught me what it means to work with a dog and understand their needs and motivation. That was the last therapy dog visit I put her though. I can never thank her enough for what she did for that young girl. And I can never thank her enough for what she did for me. She gave me my “one-time therapy dog moment,” and I made a promise to her that I would no longer force her to perform at anything she wasn’t meant to do.

Temperament of the Catahoula Leopard dog is assertive and protective, wary and aloof with strangers but never aggressive. I’ve read that sentence hundreds of times, thousands even. And it just never really sunk in. I assumed that because I was training and working with amazing trainers, I could teach my dog to do anything. And I have. Everything I’ve introduced to Odette she has taken to with amazing speed and intelligence: Obedience, Rally, Agility, hunting squirrel, loading unruly horses into trailers, etc. This breed loves to work. However, you cannot train a dog to be a therapy dog. You can teach them the obedience commands and heeling patterns to pass the test, but you cannot train the devotion and love for all people, especially those in need. It is a sixth sense with which these special dogs are born. Purebred or mixed-breed, therapy dogs are indeed born and not trained.

*This therapy dog visit happened five years ago. A few months ago I ran into that young girl at Wal-Mart, now a legal adult and just about grown up. I hardly recognized her, but she knew who I was right away. She came straight up to me and asked how Odette was. She said that she was sorry she didn’t pet Odette more, but that she just wasn’t an animal person. But she said that Odette was really special dog, and she will never forget her. The other teens in the group talked for weeks about how she was the “chosen” one.  I told Megan the summed up story of Odette’s life, and I told her I was sorry Odette just laid there. In the same twist, Odette isn’t really a people-dog either, but found you quite special that day too.

For information on joining the AKC Canine Partners community for all dogs, including rescues and mixed-breeds: