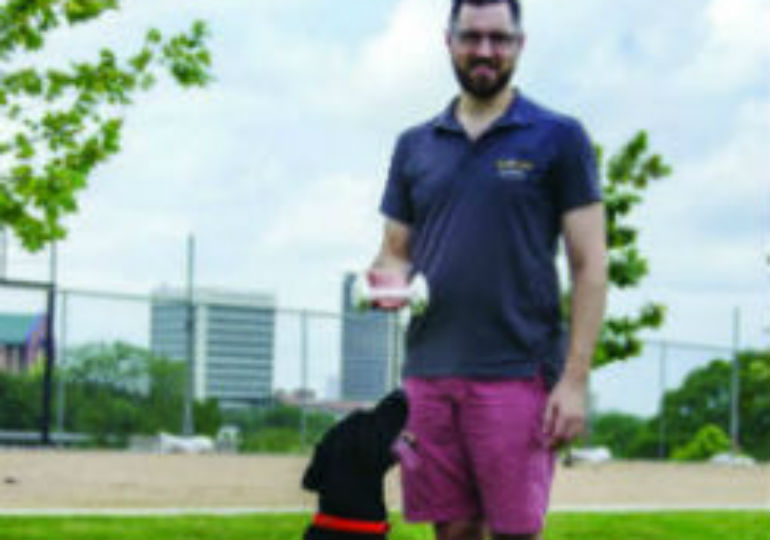 It is rare for even the most experienced competition obedience dog to earn a perfect score of 200.

But recently, an All-American Dog achieved a flawless performance in his first time in the Novice class.

Super Cooper Trooper CD BN RN and his owner Josh Wiggins of Spring, TX, not only received the perfect score, they also won High in Trial as the top performing dog at the Brazos Valley Kennel Club trial on April 2.

Cooper and Josh were competing in the Novice A class – for dogs and handlers who have never earned any previous obedience titles.

Cooper earned near perfect scores of 199 and 198 in other obedience trials that weekend, completing their AKC Companion Dog (CD) obedience title.

The kennel club was so impressed that they asked Josh to do a demonstration for the audience before the conformation dog show group judging.

But Cooper was not always an obedience superstar.

Josh adopted the Lab mix from some friends “who thought it would be a good idea to give him as an engagement/wedding gift. I got him from them at about 4 months of age once they decided the Dachshund they already had was enough and that they didn't need a second dog,” he said.

At about age 2 years, Cooper was an “out of control mess” so Josh enrolled him in manners classes at Club Canine Houston with trainer Dean Miller.

Before long, Josh and Cooper had a better relationship; Cooper had manners; and Dean suggested the two try competitions. They are now preparing for the next level of AKC Obedience – the Companion Dog Excellent (CDX) title.